Slow Porsche Driver Refuses to Move, Is Probably Close to Asking to Speak to the Manager

Cristian Gnaticov
Yep, that’s an angry Toyota GR Yaris chasing a scared Porsche 718 Cayman GT4 at the Nurburgring, in the Bridge-to-Gantry configuration of the racetrack.
9 photos

This is the plot of the video embedded at the bottom of the page, which was shot from inside the rally-bred hot hatch, whose driver showed better skills in attacking the apexes than the person sitting behind the wheel of the German sports car.

Out of spite probably, the driver of the 718 Cayman GT4 refused to make room for the GR Yaris, despite being much slower through the curves. The only times that he seemed willing to move to the side of the track was on long straights, knowing that the supermini hot hatch isn’t powerful enough to perform the maneuver.

The cat and mouse game continued until the hypothetical checkered flag got waved, and all cars came to a stop. If anything, it proved again that money doesn’t buy skill nor respect, and that it is common sense to let faster drivers overtake you, no matter what they’re driving. 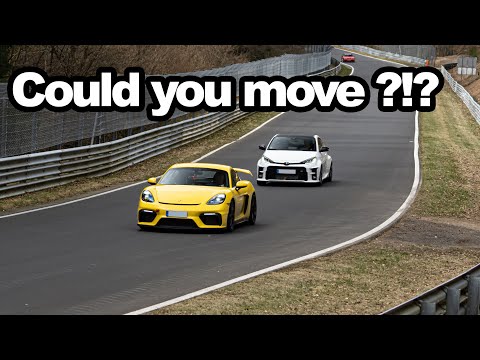