Too bad Ford has already retired the cool GT350/R, and let us all sigh in relief the flagship 2022 Mustang Shelby GT500 lives to fight another model year (even with reduced options). Now, just to prove its mettle, let’s check up on these snaky (or sneaky) quarter-mile treats.
30 photos

Without a doubt, anyone who ever witnessed the Ford Mustang Shelby GT500 on the street while canyon carving, going full steam on the track, or daunting everyone at the dragstrip knows this is one of the best sports cars to ever come from America. Right alongside the C8 Corvette, for example.

That doesn’t mean it reigns supreme. By all means, the automotive world has so many other options that it’s a continuous struggle to keep the GT500 at or near the top of the food chain. Of course, passionate owners will show everyone an enjoyable time and give the GT500 ample chance to prove its mettle. On many occasions.

Some of them gathered around for this recent feature provided by the Drag Racing and Car Stuff account on YouTube. Interestingly, although some of the Shelby GT500s involved in the shenanigans seem cloned, the focus isn’t on a singular example. Luckily, it’s also not that hard to keep track of them (wheel and stripe choices are always a good hint).

So, the initial couple of battles feature the same blue over white stripes GT500 as it goes up against the legendary R35 Nissan GT-R (dressed up in a cool shade of teal) and a menacing twin-turbocharged Lamborghini Huracan from the 0:15 and 0:59 marks. All three of them are great representatives of their respective aftermarket “schools” because we have a strong feeling the GT500 wasn’t stock either.

By the way, that’s not all the GT500 action, as from the 1:20 mark, the Shelbys start lining up one against each other, as well as against a rather inglorious BMW M3... 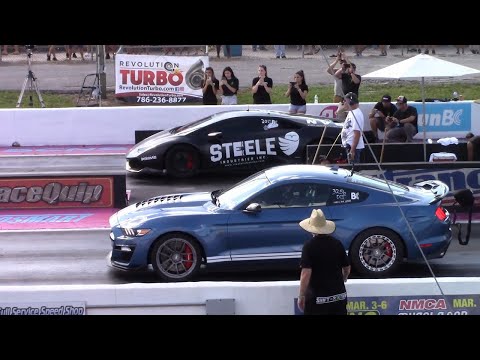