Skoda Slavia Is a One-Off Prototype, Present for the Company’s 125th Anniversary

Skoda is the brand that experienced the most rapid climb under Volkswagen's tutelage. The Czech carmaker was struggling to conquer markets outside of its domestic one when the German giant came and made it one of Europe's best-selling marques.
8 photos

It's not just the sales volumes that impress, but also the quality of the vehicles. Volkswagen played a dangerous card in making Skodas as good as they are as it opens up one key question: is it really worth spending the extra money for a VW when you can have the same platforms and powertrains with quality interiors on the cheap?

The Volkswagen Group somehow managed to work things out and kept them from stepping on each other's toes so that now they are both prosperous. Prosperous enough for Skoda to make a convertible when the whole segment (even in the luxury aisle) seems to be going down? No, not really.

The car you see here is the creation of 31 students who took part in this year's ŠKODA Student Car challenge, already at its seventh edition. The students elected the newly-released Scala hatchback as the base for their project which they called "Slavia" as an homage to the first bicycles produced by Skoda's founders, Václav Laurin and Václav Klement, back in 1895 when the company had that very same name.

The Slavia is a no-compromise spider that can do only one thing once it starts to rain to keep the two occupants dry: drive fast enough and not stop until it's not pouring anymore. Not that the Slavia is particularly fast: it keeps the standard Scala's 1.5-liter TSI unit developing 150 hp as well as its seven-speed dual-clutch transmission.

What's changed? Well, the hatchback's roof is completely gone for one thing, while the two rear doors have been replaced by solid metal. The rear seat is nowhere to be seen either, replaced by a custom cover with two humps behind the driver and passenger. The sporty look is completed by a set of 20-inch wheels stripped from a Skoda Kodiaq RS and a bespoke rear wing.

The Slavia will probably be used for various events before retiring in the company's museum where it will join the rest of the many cars Skoda built over its 125-year-long history. It may be nothing more than a student project, but it's nice to see what a modern Skoda convertible would look like considering there's a higher chance of me becoming world leader than the Mlada Boleslav-based carmaker producing something like this. 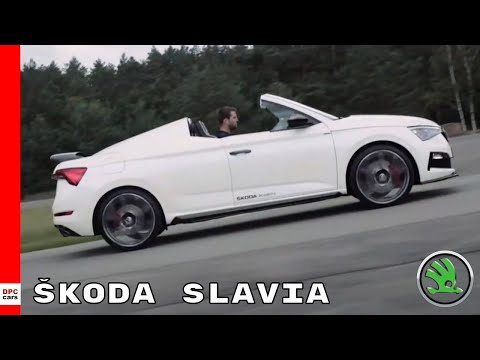