Mihnea Radu
The Skoda Kodiaq has won many awards, which would be pointless were it not for its fantastic sales. While very practical, the crossover was never described as exciting, which Skoda was only too happy to change with the most expensive RS model ever.
1 photo
Cost is the biggest issue Carbuyer reviewer Ginny Buckley has with the Kodiaq RS, it seems. But it's not the only one. Her first gripe is with the Alcantara+fake carbon combo on the sports seats, which we quite like.

Fake exhaust is another issue, as the opening on the right of the car is only there for the sake of symmetry. We would have liked this professional review to highlight the active exhaust system, which Skoda has never used before. Alas, we know it's similar to what Audi and VW have.

The review argues that at nearly £43,000, the Kodiaq RS is too expensive and that in the real world, the standard 190 horsepower Kodiaq 2.0 TDI would be about as fast. But we don't think that's fair, not without showing a drag race between the two.

And is the RS that overpriced? A 7-seat Kodiaq Sportline with the 190 HP 2.0 TDI starts from £38,000 and has similar seats. But it's 50 HP and 100 Nm down, plus it won't hold onto its value as well as something with the RS badge. Standard adaptive dampers, LED lights and virtual cockpit further sweeten the deal.

For the record, the Kodiaq RS is supposed to reach 62 mph (100 km/h) in 7 seconds and has a 137 mph (220 km/h) top speed. So do we disagree with this review? Not completely. With just a few popular options, the SUV is in premium territory. Also, the performance is no different from your basic BMW X5 or Audi Q7.

But what's not taken into consideration is how trusted, and popular the Skoda brand has become in certain European countries. You wouldn't believe what people are paying for a good Octavia these days. 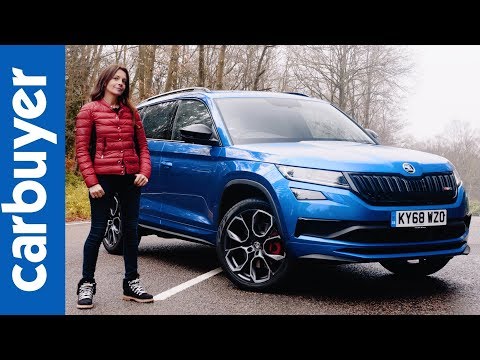