3 2022 Skoda Fabia Monte Carlo Looks Like a Hot Hatch, Ain't Even Warm nor That Affordable

4 Skoda Fabia Monte Carlo Is the Sportiest Version We'll Ever Get, Still Fails To Impress

Škoda has presented its next-generation rally car, the Fabia RS Rally2. At this point, it is essential to note that the vehicle is the successor to the Fabia Rally2 evo, so try not to confuse the two. The new one is based on the fourth-generation Škoda Fabia, and it builds on the legacy of the most successful Rally2 car in recent years.
15 photos

Škoda's motorsport department did its best to link this racing vehicle with its production car homologs, which even included going for a Hyper Green color, which mimics the one on the Octavia vRS and Enyaq Coupe iV vRS. The rest of the elements are meant to resemble the Mk4 Fabia, but with modifications in line with the FIA regulations.

The new racing car from Škoda comes with a 1.6-liter turbocharged gasoline engine that is derived from the production-spec EA888 series. While the latter has a 2.0-liter displacement, the racing car only has 1.6 liters of displacement, along with a 32-mm restrictor on the turbocharger inlet. The unit is good for about 289 horsepower and 430 Nm of torque.

Power is sent to all four wheels through a five-speed sequential gearbox, and the front and rear differentials are mechanical with a limited-slip function. There is no center differential here, as the rules do not allow it anymore, and there are no traction control systems either.

The Škoda Fabia RS Rally2 car can reach a top speed of about 200 kph (124 mph), which may not seem that much with such power under its hood, but the reality is that it reaches its top speed quickly, as it has a short final drive for its transmission.

Another principal element of the transmission, the separating clutch between the front and the rear axles, is hydraulically operated and is activated when the handbrake lever is pulled. This way, the vehicle can perform skids after locking its rear wheels without the driver having to press the clutch.

Just like with any other rally car, the Škoda Fabia RS Rally2 comes with a rollcage, a set of FIA-approved racing seats, as well as a fire suppression system, and a special fuel tank meant to withstand an accident at high speed.

The latter comes with a special foam filling that prevents fuel leaks even if it is cracked in a crash. But it is unlikely to have the Carbon-Kevlar composite cover, as well as its shock-resistant rubber, damaged in an accident.

Moreover, the Škoda Fabia RS Rally2 car is designed to run on 100% sustainable gasoline, which is already deployed in the FIA World Rally Championship. The fuel in question is derived from biological waste and synthetic e-fuels and is made using renewable energy. 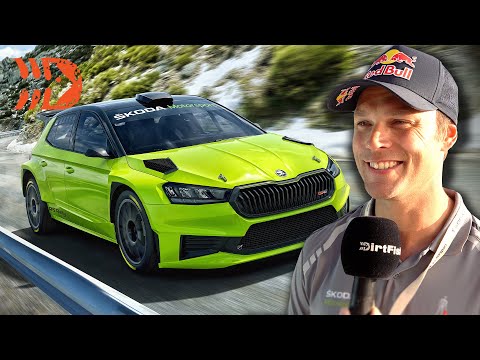