4 Skateboarder Hitches a Ride with Van in London, Reaches Speeds of 30mph

5 Florida Skateboarder Jumps on Audi R8 V10 Plus, Misses the Landing
Up Next

Skateboarders Go Down Open Street at Night - What Could Go Horribly Wrong?

Vlad Mitrache
I guess this clip should come with a warning because it does show somebody getting injured, even though it doesn't look to be that bad - certainly not life-threatening or anything like that. Actually, considering the circumstances, you could say they got off quite easy.
1 photo
First of all, it's worth noticing that out of the three youngsters attempting the stunt, only one wears a helmet. The other two have no protective gear whatsoever, despite the fact that what they were about to do required at least some knee pads and handguards, if not full body armor. Well, it definitely required body armor, as we're about to see later in the video.

Then there's the fact they have a car following at such a short distance. In theory, the car can brake a lot quicker than they can on their skateboards, but if things go wrong and one of them falls over just a few feet in front of the car, then it's an entirely different story. You can even see the guy with the helmet signal the driver to come closer - so he's the kind of guy who pokes the lion at the zoo, then.

Finally, they're doing it on an open street where other people drive their cars and don't expect to run into three guys on their skateboards going way faster than they should be. Yes, they do it at night when the traffic is lighter, but it's also more difficult for the others to spot them. Because you didn't really imagine they would wear any type of lights, did you? They have the car holding their back, but they also cross rather large intersections and go by numerous side streets from where unaware drivers could get right in front of them.

Maybe they're skilled boarders and have no problem avoiding an obstacle if it presents itself. We have no reason to doubt they possess some skill, but as you can see, once the tiny skateboard starts fishtailing, there's no stopping it. In the end, it wasn't another driver that caused the incident, but one of the three guys who cut off the other - their skateboards might have even touched, hard to tell - causing him to lose control and crash into the wheel of a parked SUV, ribs first. Yes, ouch, but judging by the reaction of the girl filming the whole thing, it's probably not the first time she's seen something like this. If she's not worried, neither should you. 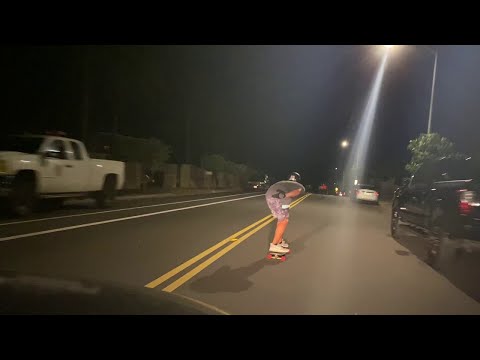