We’ve come accustomed to seeing six-wheel off-roaders and pickup trucks, but such vehicles are still a rare sighting across the Ocean. So rare that a converted Volvo XC60 with three axles and a pickup bed causes a traffic disruption in Stockholm.
7 photos

Ever since the 6x6 mania started to make waves, we’ve seen all sorts of vehicles converted to a six-wheel life. It’s not that they are more practical, although some feature proper 6x6 traction, but they sure scream wealth and status. It’s almost like you don’t even have a truck unless it has a third axle and a stretched bed. That’s why many are built to impress without offering much in terms of traction or utility.

Well, the trend has been exported over the Ocean, as we’ve seen in a video from Sweden. Roaming the streets of Stockholm, a red contraption seems to have drawn its inspiration from both American 6x6 trucks and Australian utes. Since we’re in Sweden, you wouldn’t find it weird that it is based on a first-generation Volvo XC60, a pretty handsome SUV in its heydays.

Unlike the SUV, this one comes with an Australian-style bed and a third axle. It’s still unclear whether this is powered or not, but the way it was integrated with the rest of the vehicle is pleasing to the eye. The build is pretty good, actually, with the taillights cut in half to match the new rear end. It’s not ugly, just unusual enough to block the traffic while being filmed by Swedish enthusiasts.

The Volvo was attending the Stockholm Cruising along with many other American cars and trucks. The work comes from the Swedish company Dalbo Fordonsteknik, which specializes in building similarly-looking vehicles. It’s not quite a novelty since we wrote about the modified Volvo six years ago, and it’s great to see it has survived all this time. 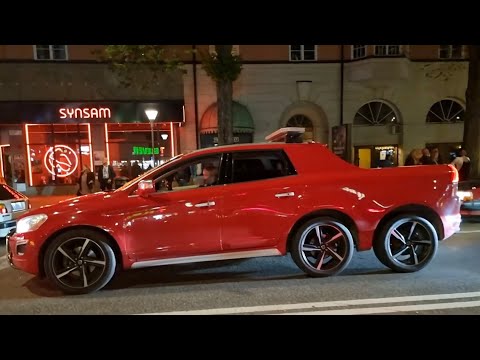