3 Ford Thunderbird Spent Too Many Years Locked in a Barn, Still Lovable

5 1955 Studebaker President Barn Find Is a Legend Fighting for Life
Car video reviews:
Up Next

A single-owner Pontiac GTO, now that's worth its weight in gold. It doesn't matter the condition or model year, people will drive cross-country to have one. But this 1964 example never left home and was recently brought back to life after a painstaking restoration process.
7 photos

In this recent video of Ridiculous Rides, Barcroft investigates a rare Pontiac GTO, considered one of the original muscle cars. It has only one owner and underwent an extensive repair process before looking like this lovely jewel.

CW Restorations in Ohio worked on the GTO for three years, its owner Chris Winston saying that "it's probably the worst rustic car I've ever worked on." The 1964 Pontiac was bought when new. The owner tells stories of how he took the back seat out to fit a baby crib.

It was his daily driver car. But in the late 1970s, the fuel tank fell out of the car and the GTO got parked in his barn. The animals really did a number on the interior. The same owner, 30 years later, decided to restore the rare muscle car, since it had such great sentimental value.

It was rusted from one end to the other, so the builders had to install a brand new frame, and floors. But a lot of the original Pontiac has been kept, and unlike all those LS-swapped restomods, this still has the original V8. However, just for the sake of safety, they did upgrade the suspension and brakes.

The GTO is a legend because it pulled Pontiac out of the grave and started the muscle car era by introducing the concept of big V8s in medium cars. But it almost didn't happen because just as this project got off the ground, Ford, GM, and Chrysler agreed to stop racing.

In 1964, Pontiac fitted the 389 V8 into the LeMans. The GTO was born, boasting chrome valve covers and exhaust tips. Only that year had this style of headlights too. 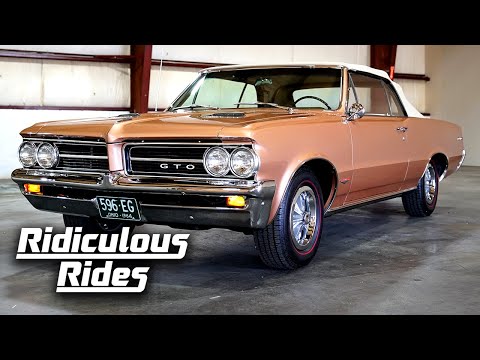