4 Eye Candy Alert: Are these Luxury Cars Worth $1 Million Abandoned?

Hey, if genuine petrolhead blood runs through your veins then you probably are an adrenaline junkie, at least a little bit. And believe it or not, the Love Me Again singer is one of those people. Not only is he passioned about auto engineering having studied it for a while before switching to performing, but John Newman says he still builds go-karts in his spare time.
1 photo
2013 was the year for the 25-year-old British singer since his Love Me Again single ripped the UK charts apart. His 2014 feature in Calvin Harris Blame also topped the UK charts, but if the world knows this artist for something it’s for that song. And with great success comes the substantial amount of fame and fortune. As of February 2014, Newman sold over 1.3 million records in the UK alone, just about right to get Ferrari’s attention, apparently.

The artist did not hide his enthusiasm on his first visit to Maranello in the run-up to the release of his second album “Revolve”, scheduled for October 16. Who knows, perhaps this one will bring enough cash to his bank accounts for him to actually afford a new Ferrari.

Nevertheless, Newman was treated to the full factory tour, of course, marking everything from the Engine Assembly department to the Assembly Lines, Classiche Division, Tailor Made Atelier, Ferrari Store, Maranello Museum and a couple of drives in the simulator.

Like always, the most exciting part of the visit came at Fiorano where after a couple of laps beside chief test driver Raffaele De Simone, he took the wheel of an F12berlinetta himself.

Of the experience you can find out more by watching the video bellow, until then, however, you’ll want to know John Newman is, in fact, mad about cars. He may be a successful artist, but his actual passion if for car engineering. More of that in the adjacent video. 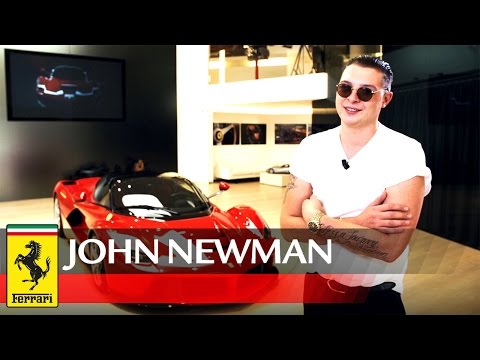