1 Boeing Shows Why the H-47 Chinook Is Awesome, the King of Pinnacle Landings

2 Blast From the Past: Mil V-12, the Largest, Most Useless Helicopter Ever

Daniel Patrascu
The future of military helicopters will never be the same once all the ongoing projects are completed and accepted into service. From tilt-rotors to attack choppers, America’s armed forces are looking to revamp pretty much everything in this segment.
5 photos

As far as attack helicopters go, there are presently two significant ongoing programs. The first is called Future Long-Range Assault Aircraft (FLRAA) and aims to find a replacement for the aging Black Hawk. The most advanced proposal in this segment seems to be the Defiant X, developed by Boeing with Sikorsky.

But Sikorsky is involved in another project as well, one designed for the simpler Future Attack and Reconnaissance Aircraft (FARA) program. Working together with parent company Lockheed Martin on this initiative, Sikorsky came up with something called S-97 Raider (project name Raider X).

In the middle of April, the company showed off the helicopter at the Redstone Arsenal in Huntsville, Alabama, in front of Army representatives. There were two flight demonstrations conducted, targeting low-level maneuverability and high-speed capability, and you can have a taste of how all went in the video attached below.

"The combination of the coaxial rotors and the propulsor are really the enablers for this transformational technology. As we demonstrated today, in low-speed flight we are as capable as a conventional helicopter, but when we engage the prop, we are able to operate in a whole new way – it's much more like flying an airplane," one of the pilots of the S-97 said in a statement.

The prototype you see here is the only helicopter meant for the FARA program that is currently in operation. It is the one used by Sikorsky to develop both the Raider X and Defiant X further.

The Army plans to replace the Black Hawk sometime next decade, so the development of both these new machines is likely to accelerate over the coming years. 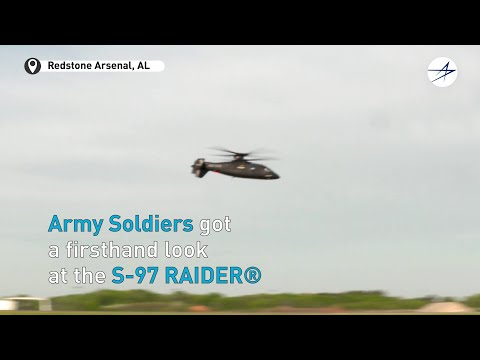