1 Robonauts: The Future in Robot Hands

3 Robonaut 2, the First Human-Like Robot to Fly into Space 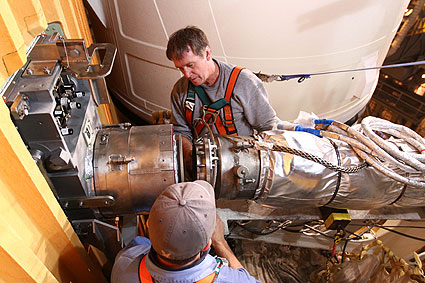 Another delay in the launch of the last mission of space shuttle Discovery is also postponing the moment when the first humanoid robot will reach space. The National Aeronautics and Space Administration (NASA) announced earlier this week that it is unlikely Discovery will be allowed to take off before December 3.

The initial launch date has long passed, with the engineers from NASA calling for a stay after initially helium and nitrogen leaks in the pressurization portion of the shuttle were discovered while Discovery was being fueled.

The problem noticed in the beginning of the month proved to be more serious than anticipated. After finding the original crack in the fuel tanks, NASA discovered four others in the support structure of the tanks.

“The Kennedy Space Center 'Call-to-Stations' to begin the launch countdown will be no earlier than Nov. 30, supporting a first launch attempt no earlier than Dec. 3 at about 2:52 a.m. EST,“ NASA said in a statement.

When it will depart the launch pad, the mission, dubbed STS-133, will be delivering the Permanent Multipurpose Module and the Express Logistics Carrier 4 to the International Space Station (ISS). The 35th shuttle mission to the station will also resupply the ISS.

On board the mission, American manufacturer GM will be placing its Robonaut 2, the first humanoid robot created for use in space. Robonaut 2 has been created so that it can use the same tools that station crew members.

For now, due to the lack of proper outer-space protection however, it cannot be used in spacewalks. In the future however, that may change and the robot may get new roles.