5 Hooning Is Murder, Says this Facebook Community
Up Next

Showoff Crashes His 1975 Chevrolet Camaro Trying to Do a Burnout

Home > News > U-turn
Gabriel Nica
During my recent trip through some of the Scandinavian countries while being part of the 2015 Gumball 3000 Rally, I noticed something rather interesting. It turns out that Norway, a country that has been in the news lately for its massive ‘adoption’ of Tesla Model S cars has a soft spot for old-school American muscle cars.
1 photo
As a matter of fact, that’s something I notice throughout the countries I visited, including Sweden and Denmark alongside the previously mentioned Norway. Scandinavians love muscle cars, no matter how many EVs are on their roads.

At one point, we even stopped at a petrol station in Norway to fill up our Camaros and one guy simply pulled up next to us in an original Pontiac Firebird and told us that he also has two Z28 Camaros from 1969 at home. Needless to say we were blown away.

And it wasn’t only that. On the road we noticed a lot of old school muscle car models, from Mustangs to Continentals with lowered suspension setups and cool graphics all around.

Another interesting piece of evidence in our attempt at proving that muscle cars are really popular in Scandinavia is the video below. In it we can see a 1975 Chevrolet Camaro doing a small burnout. What didn’t go according to plan is the exit though.

Filmed in Luleå, Sweden, the video description says that the driver was actually trying to offer the guy with the camera something Youtube worthy. Unfortunately for him, his little stunt ended up in a pole, in the funniest way possible, with an amusing, noticeable ‘clunk’ when the deed was done. It’s rather painful to watch though, check it out. 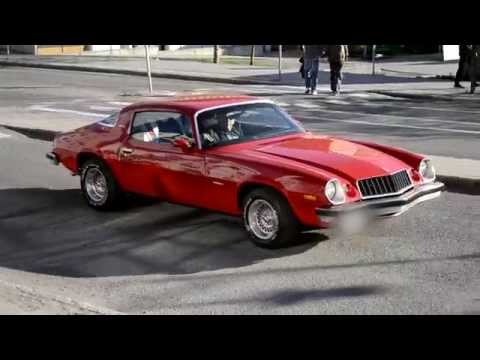