5 Beaten RAM TRX on 44" Mud Tires Pays Dealership a Visit, Stops at a Drive-Thru
Car video reviews:
Up Next

BMW M3 Touring Teased Yet Again, It Is Happening This Year

Should We Stop Giving “Street Cred” to Folks Who Do Unprofessional Auto Stunts?

In a world of incredible social media achievements, some limits should still be observed. This is a way bigger discussion, but let’s just focus on a tiny portion of automotive-related cravings.

First of all, the most sensible advice we have is to observe the law. For example, let’s take up the issue of stars and reckless driving. We have the utmost respect for Jason Momoa and his vehicle-related trials and tribulations. Not to mention that I have been following his acting career ever since he was Ronon Dex in the Syfy science fiction series Stargate Atlantis (2005–2009).

That is way before his Khal Drogo rise to stardom and the subsequent DC’s Aquaman gig. But I also have a comment regarding his very cool dad-son outing in a pink Cadillac. No, it’s not about the fashion statement, but rather the fact that he was apparently using his smartphone for an Instagram story while driving. That is a big no-no, especially when people look up to you as a deeming, respectable example.

Hope it was just the euphoria of the moment. Anyway, now let’s get to the main part. That would be about vloggers who jump cars to rack up those high views. Which, in turn, gives them a comfortable existence and the option to continue down the same path of crazy, unprofessional stunts.

One example would be Rick “Corvette” Conti’s recent, shady C8 Corvette over C8 Corvette jump. It was supposed to fulfill a life-long dream. But there are a few issues, and not just with the bad lighting surrounding the jump. I am not even sure he actually performed the stunt since there was no perceivable landing ramp... And these days CGI can make a huge atomic lizard and a humongous ape seem entirely relatable, life-like blockbuster movie characters (“Godzilla vs. Kong” pun intended).

But there’s an even better example of a hugely successful “living life to the limits” YouTube vlogger. That would be the entertaining character behind the Street Speed 717 channel on YouTube. He’s done everything in his power to extract the most “click-bait” moments out of the automotive world. And that’s a sad thing, as it includes dangerous street racing... as well as lots of jumping around in Ram 1500 TRXs. Note the plural.

While we have been following his exploits for longer, he came to the world’s attention when he jumped and almost destroyed a brand-new 2021 Ram 1500 TRX. He was even criminally charged for that dangerous public stunt. Luckily, he learned his lesson, and now his clearly unprofessional stunts are confined to his farmland. Yep, the perks of racking up huge views include a huge playground.

As well as an $800k Aventador SVJ, among many others. And we are bringing it up for good reasons. After all, it was placed in between two dirt ramps and an orange 2021 Ram 1500 TRX jumped over it. We are starting to lose track of these stunts, but the YouTuber has also jumped over a Dodge Viper ACR, as well as another (yellow) Aventador, among others.

Frankly, this time around, we are giving it a hall pass. Though, in his own words, he was not even deemed responsible for owning a drone, so far. But everything else that is automotive-related seems to go. Including a Ram 3500 dually versus Ram 1500 TRX tug of war (from the 4:30 mark) or frightening the unsuspecting girlfriend’s mom. Well, that one comes much later, from the 16:05 mark, in the video embedded below.

In between, there are lots of friendly jokes, along with the Aventador SVJ “off-road” presentation (at the 8:31 mark). Not to mention the mighty Ram TRX over “priceless” Lambo Aventador SVJ jump itself, which can be seen from different angles – as well as in slow motion – from the 14-minute mark. So, should we stop giving these folks the credentials? Maybe not, but we sure need to be pickier! 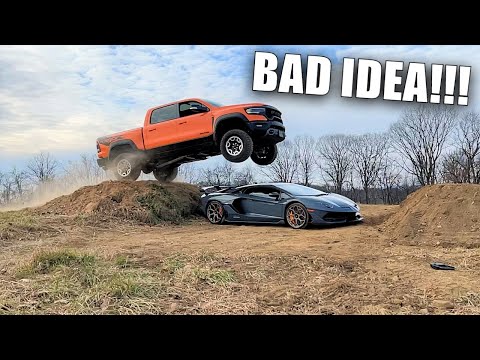