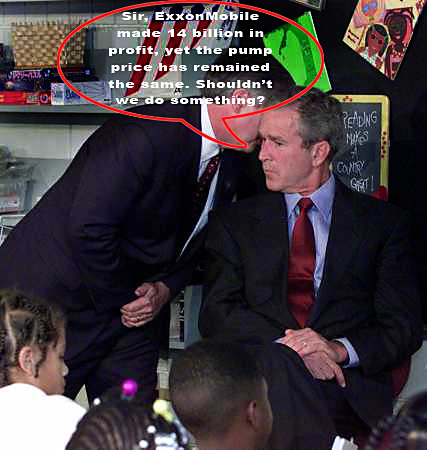 One man's meat is another man's poison, that's the proverb that best describes this rather strange, if not ridiculous, situation. While car manufacturers are mulling partnerships, cutting jobs, closing plants, discontinuing models, in other words, doing the corporate nasty, oil companies are sipping Don Perignon and enjoying rare caviar in a jacuzzi with two luxury strippers pondering their enormous profits.

First there was British Petroleum, or BP for those of you who are paying attention to fuel prices. Anyway, the third largest global energy company, headquartered in London, announced a “record three-month profit of £6.4 billion”, timesonline.co.uk recently reported. Not bad at all considering the aforementioned apocalyptic economic crisis forecasting dark times ahead. Mathematically speaking, things make a lot of sense.

The oil price has gone down from around $150 to $60 (£37.68) a barrel, but this severe decrease is not reflected in prices at the pump. Sure, when the reverse happens and oil prices go up, even by a small margin, consumers are immediately hit. Luckily, the British government was quick to react.

“BP have absolutely no excuse for not passing on any fuel price falls to customers. It would be a scandal if they do not,“ George Osborne, the Shadow Chancellor, told the same source.

While it doesn't make things better, it's comforting to see that politicians are not ignorant to these obvious and dare we say, machiavelic, machinations.

However, BP's soaring profits pale in comparison to John D. Rockefeller (a name mentioned without any conspiracy connotation)-founded ExxonMobile's figures. The largest company by revenue has just announced a record third-quarter profit of 14.83 billion dollars, a flabbergasting 58 percent increase compared to last year. Yes, they will most likely lose 500 million dollars in the fourth quarter due to costs on hurricane-induced repairs and lower output, but that figure once again pales given the outlandish profit.

Unfortunately for US citizens, their government seems to remain mum over this matter. Perhaps they should learn something from their overseas ancestors and take a stand.

Mr. Bush, please wake up sir, we have a crisis on our hands.