One of the most fun projects I ever carried out in school was building my own rocket and launching it on school grounds with the rest of my class. While reliving the good ol' days may be difficult, except during class reunions, you can still build rockets easily, quickly, and with little cash. That's precisely what you'll learn to achieve today.

Shoot for the Moon With Your Very Own 1969 NASA Saturn V Rocket: Powered by CO2 Cartridges

I recently checked back with one of my favorite YouTube channels, Drew Builds Stuff. You may have heard of this channel as we've covered some of Drew's work before. The last time we witnessed Drew teaching the world how to build a fantastic travel trailer to be towed behind a bicycle. Best of all, it was all on a budget of just $1,200.

As for the project we'll be exploring today, it's a simple and effective way to build and launch a CO2-powered 1969 Saturn V moon rocket replica. Sure, it won't perform like the real deal, but if you're looking to give your inner child a boost of nostalgia, this is one way. Maybe you have kids of your own and were looking for something to keep them entertained.

Now, one thing about Drew is that he seems to like designing and building such projects with the lowest budget possible. After all, not everyone has limitless cash. So, for this Saturn V rocket, the channel's host starts off with nothing but some XPS foam insulation board. With a sharpie, a box cutter, and some straws, the inner core that will ultimately guide your rocket's launch is set.

After slathering panel after panel in glue and layering them together to form what will eventually become the rocket, the structure is set to cure for 24 hours. Yes, you'll start the project on Saturday, but you'll end up enjoying it on Sunday if there's still light left in the day. Once cured and the glue has solidified, it's time to shape the XPS block into a rough rocket-like shape. Up next? The lathe.

I feel this is an excellent time to point out that there's a little disclaimer on Drew's video, stating, "This video is for demonstrative purposes only. Do not attempt." Do not attempt!? I don't think so, Mr. Disclaimer. Considering you can build one of these suckers for around $40, it seems worth the time, effort, and possible risks. That's just my opinion; be sure to wear safety goggles.

With the lathe, Drew begins to shape the Saturn V into its final form, and as the video continues to move forward, so does the rocket come into view. However, slowing the lathe down, there seemed to be a wobble to the spin. I guess we'll see if Drew's ground control has the stuff to get this sucker airborne.

With fins, a coat of paint, and a hand-drawn version of the American flag added, this puppy looks about complete. To add the CO2 cartridges, Drew creates four chambers that will house the shells and ultimately line up to a mechanism designed into the launch pad. Remember, CO2 cartridges must be punctured to release the gas trapped inside. Doing this manually is a pain, not to mention unsafe. As for trying to activate four cartridges simultaneously, it would be sheer madness without a mechanism to achieve this for you, but Drew has the answer.

Nearly half of the video is dedicated to this apparatus. Believe it or not, the whole contraption is spring-loaded, and as a string is pulled, a plank of wood with four nails lines up to the cartridges and causes them to expel their propulsive gas together. Simple and effective. To make things right, a launch tower sits in the background of this do-it-yourself machine.

In the final moments of the video, we're taken outdoors. It's an overcast day with snow falling on the local town. But going up will be your XPS foam Saturn V rocket built by the little NASA engineer in you. But, if your space machine's trajectory is the same as Drew's, I'm sure you can find a way to improve things. Just a little something-something to keep you entertained during some summer days. 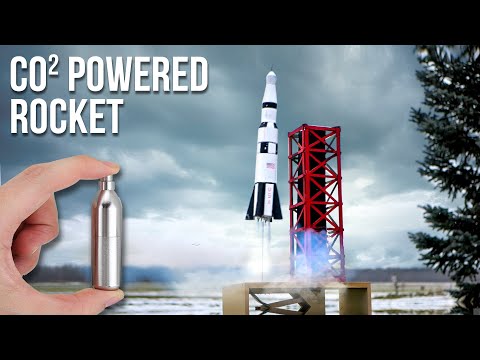