5 Jeep Trackhawk vs. X5 M Competition vs. RR Sport SVR Drag Race Is a Super-SUV Showdown
Up Next

Mircea Panait
The Ford Mustang Shelby GT500 previously obliterated the Cadillac CT5-V Blackwing on the Edmunds U-Drags course, which combines acceleration with hard braking and cornering to weed out the one-trick ponies from the bonafide performers. Against the BMW M4 Competition with M xDrive, the supercharged muscle car improves its record by three tenths of a second to 30.9 seconds compared to the Bimmer’s 31 seconds.
12 photos

How was that possible? For starters, the corner-carving coupe from Germany launches much better off the line thanks to all-wheel drive and one of the best launch controls in the business. But by the quarter-mile mark of the acceleration zone, the Shelby catches up big time. More specifically, the M4 and GT500 cover 440 yards in 11.3 and 11.4 seconds, respectively.

Both cars brake almost neck and neck, although the Shelby runs more aggressive rubber shoes that help it corner like a charm despite its rear-wheel-drive chassis. The Pilot Sport Cup 2s really earned their money. The dash to the finish line is where the supercharged V8 of the GT500 truly shines even though Ford quotes a slightly higher curb weight than BMW.

We often think of muscle cars as the automotive equivalent to dumb dinosaurs, but with the right setup and enough resources under the hood, even a Mustang can better the highest-performing M4 currently available to purchase stateside. The BMW also has worse tires in the guise of Michelin Pilot Sport 4Ss, and that’s that for the latest episode of Edmunds U-Drags. 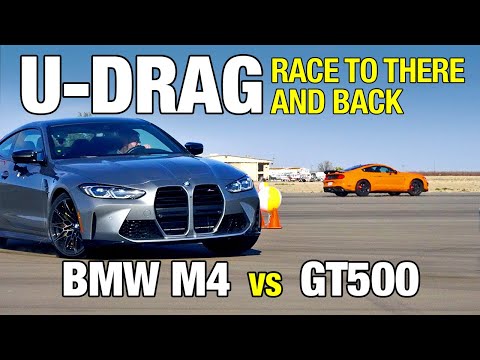