2 Ford Mustang Sedan May Only Seem Like a Proper Fusion Revival, but There's a Catch

Home > News > Auto Motorsport
Alexandru Boghiu
Well, things got ugly quicker than the Shelby could even get in the race, which is unfortunate. Because what good is a supercharged 5.2-liter V8 if you’re sluggish off the starting line?
10 photos

Even though it has the smallest engine amongst the three, a 3.8-liter twin-turbo V6, the Nissan didn’t have any problem winning two races back to back. Its 565 hp (572 ps) and AWD proved to be enough to decimate both opponents from a standstill. The outcome was the same for the first two races, with the BiTurbo 4.0-liter V8-powered AMG GTS coming in second.

But it was far from over, as the Shelby GT500 had some unfinished business to take care of.

You know how the saying goes, third time’s a charm. And when the next race started, with the cars rolling at 32 mph (50 kph), the Shelby was back in the game, pulling ahead of the pack like it was nothing. The AMG GTS kept its second spot, with Godzilla biting the dust for once.

Still, the guys had to go at it one last time. The fourth try was another rolling race, but the starting speed was bumped up to 49 mph (80 kph). The outcome was pretty much the same, with the Mustang taking the lead early on, gunning for the first place. The GT-R took the last place again. As for the Mercedes, it had the most consistent results regardless of racing conditions.

In the end, you win some, you lose some. And even though it’s showing its age, the Nissan GT-R is still a formidable opponent, going toe to toe with the best of them to this day. 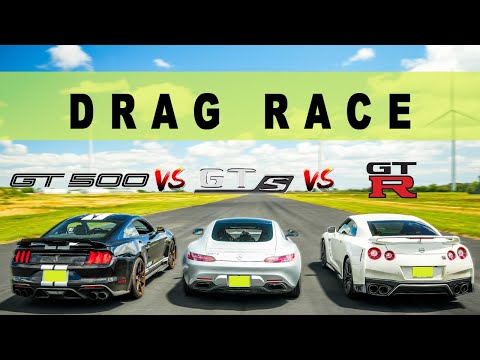