3 Spend Just $3 and You Could Land a High-Performance Shelby Couple With 1,430 hp

American sports car aficionados have a new conundrum on their hands – is the Ford Mustang Shelby GT350R better than Chevrolet’s latest C8 Corvette Stingray? It’s front-engine rear-wheel drive muscle car madness against the reinvented mid-engine sport machine, and what better way to showcase both than with a friendly race on a Southern Californian track?!
21 photos

Austin Everett, the 20-year old college student / racing driver that loves cars so much he turned his passion into the Speed Phenom YouTube channel, was recently out and about for some quality track time. So, he took a four-hour drive to the Buttonwillow Raceway in Southern California in one of his cars from the “American Supercar Collection.”

While still very young, this popular vlogger is a breed apart for us – he exhibits the wisdom and manners of someone who’s been through hardships all his life. You can see that he’s got the utmost respect for both cars and their drivers by the way he talks and gives the shout outs to fellow racers he meets on and around the track.

Anyways, once there he gives us a tour of the surroundings where he finds some of the Ford Mustang Shelbys cooling off after a bit of backward track pleasure (the Southern Cali circuit has this odd choice) and we can see how much he knows about these models.

He encounters a GT350R changed to quasi-racing specifications and a pristine Ford Performance Blue GT500 with the Carbon Fiber Track Pack that has been wrapped for a stealthier matt appearance and shows us a quick tip – the tires on the carbon fiber wheels look spent, but the Blue Oval actually allows them like this up to the point they start showing some tiny holes in them. Only then do you need to change to a new set – before that it’s racing all the way, without worries.

Interestingly, while he’s been showcasing a lot his red C8 Corvette, this time around he brought to Buttonwillow one of his three Shelbys – the GT350R. He must be nostalgic about it because he clearly specifies that he hasn’t driven it in a while on the track. And with spent tires he emphasizes the experience is going to be as safe and fun as possible.

No worries about getting bored because his level of knowledge makes us forget about his flat tires, especially when he casually engages in a friendly battle with another red C8 Corvette. The owner knows what he’s doing (we find out afterwards that he also drives Lambos, including an LP640 converted to RWD!) and the ensuing race is just great.

We are not going to spoil the fun of watching the video embedded below, but at least we can entice you to watch it carefully to find out which one of the two drivers has a nice save... 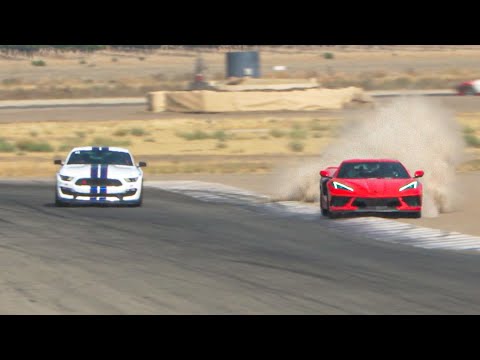