3 Tesla Plaid Looks Great Murdered-Out, but Only When Lowered on Masterpiece Wheels

First, I’d like to apologize for the graphic content of the video you’re about to watch. It’s basically carnage over a quarter mile, ending with a mercy kill, and I’m not sure whether that makes it better or worse. The loser of this race had less of a chance to win than Maverick did in that F-14 Tomcat against the unspecified 5th-gen fighter.
6 photos

Life, of course, is not a movie, and the underdog rarely comes out on top, especially when there’s such a massive discrepancy in terms of performance. I’m not just talking horsepower and torque, but also traction, electronics – the works. There’s no scenario out there where a Shelby GT350 Mustang could outperform a Tesla Model S Plaid.

You could race them over a quarter mile, a half mile, full mile, you name it. If distance wasn’t an issue, I guess you could wait and see which runs out of “juice” first at full throttle. Now that would be an interesting race and it would work on an oval track.

Anyway, let’s touch on the Ford and look at some numbers. The GT350 is powered by a 5.2-liter Coyote V8 engine, good for 526 hp and 429 lb-ft (581 Nm) of torque. On a race track, this is a much better option than say, a Mustang GT, but in a straight line, you won’t get that much more performance compared to its lesser sibling.

If you had a Shelby GT500 then sure, that would be a completely different story, but barring any unforeseen incidents, the Model S Plaid would make quick work of that too. I mean it, you literally need a Bugatti Chiron just to make the flagship Tesla sweat a little.

In the end, watching this race is a little like watching Rocky Balboa and John Wick in a hypothetical fight to the death. Would be over before it even began. And to make matters worse, the driver of the Model S didn’t even give it everything it had. Maybe they felt bad. 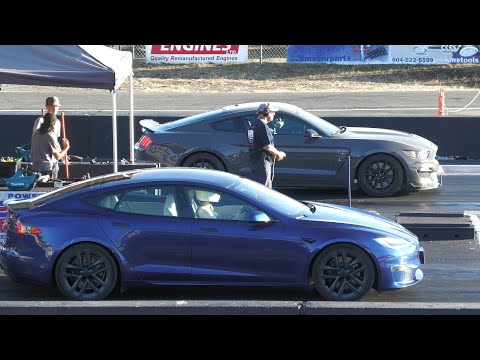