3 LiDAR, the Technology to Make Self-driving Cars a Reality

We used to see diesel trucks struggling to overtake Teslas just so they could roll some coal at them and think that was the worst possible form of EV hating.
7 photos

Then, Tesla introduced the Sentry Mode on its vehicles and, all of a sudden, a huge number of cases where people did malicious things to the cars were exposed. They ranged from simply removing the charging cable to the more serious ones that involved sharp objects making contact with the vehicle's paint, but they all had one thing in common: they were completely unprovoked.

The thing is that some people don't need any particular reason to exert they hate toward EVs and, since Tesla is their prime exponent and also happens to have a 360-degrees video recording feature, the brand seems to find itself at the center of most of these cases.

What exactly drives these people is a thing of mystery. It appears that, for some, the subject of electric vehicles is just as divisive as politics or sports, pushing them over the brink of what is moral and, sometimes, even legal.

One possible extreme example (and we say "possible" only because the investigation is still undergoing, but all signs point in a single direction) comes from the Swedish town of Malmö. Late last night (local time), the authorities had to deal with "seven or eight" Teslas that had caught fire right outside the company's local facility.

According to local outlet Svt, the EVs were scattered across a 3,200-4,300 square feet (300-400 square meters) area, which suggests there was little chance of one burning vehicle setting all the others on fire. The report doesn't specify whether any of the vehicles were charging at the time of the incident.

The video and subsequent pictures show just how far apart the vehicles were from each other (we'd say about over 20 feet on average), suggesting the initial supposition of arson made by Magnus Köhlin, the head of the Rescue Service South - one of the three fire units called into action - all the more likely to be true.

According to the Swedish press, the fire fighters were very cautious about inhaling any harmful smoke during operations, with the authorities subsequently issuing an alert for the residents in the area to avoid the possibly dangerous fumes as well. The report says nobody was harmed or injured as a result of the incident.

Currently there is no total damage estimate, but since it looks as though most - if not all - the vehicles involved were Model S sedans, we're probably looking at over $500,000. The fire fighters had to focus on the vehicles closest to the building first to make sure the fire wouldn't spread.

A police investigation is underway, but it's too early for any final official conclusions. One that we can draw right now, however, is that a burning EV, regardless of how it ended up that way, is never good PR for battery-powered cars. 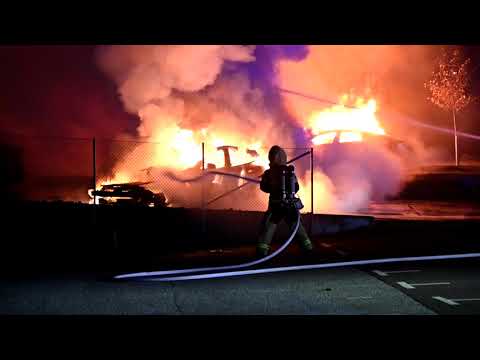