4 Prost to Race for A1 Team France at Kyalami
Car video reviews:
Editorial

With so much at stake and so little room for error, it doesn’t come as a surprise that Formula 1 has seen some tremendous rivalries over the years.

Senna vs Prost: One of the Fiercest Rivalries in the History of Motorsport

Ideally, it’s the opposing team that bangs their wheels going in the battle for supremacy, but sometimes, the heat of “war” is contained within the very same garage. And when the machinery is on equal terms, the clash of the egos begins.

After Mercedes AMG Petronas secured their sixth consecutive constructors and driver’s world championships at COTA with two races to spare, Ferrari somehow managed to sabotage itself once again, after Leclerc and Vettel brushed each other in the closing stages of the Brazilian Grand Prix.

Brushed is a little bit of a polished word in F1 as any contact at over 180 mph usually does not end well, and so it did. Both Sebastian Vettel and Charles Leclerc suffered damage from their collision and had to retire immediately from the race, missing out on gathering a good chunk of points to secure a podium finish at the end of the season for Ferrari.

The adrenaline rush to cross the line leading the pack in every single race is what a driver is aiming for. Unfortunately, only one can take the win, and that can create a little bit of chaos.

Let's take a look at one of the most famous in-team rivalries that have taken place over the course of time:Ayrton Senna vs. Alain Prost – McLaren Honda
The 1989 Formula 1 season was set to serve as a continuation of the 1988 campaign when Senna and his teammate Alain Prost won fifteen of the sixteen races. The one race that neither of the drivers won was the Italian Grand Prix, where Ferrari managed to take an emotional victory four weeks after the death of Enzo Ferrari.

The McLaren-Hondas did not enjoy quite the same level dominance this time, but from an early stage in the championship it was clear that either Prost or Senna would come up on top. While there had been some moments of tension between the pair, it was nothing in comparison to the hostility which developed in their second season together.

Although there was some sort of mutual admiration between the two, the battle for supremacy turned into one of the fiercest rivalries in the history of any sport.

Going to Suzuka, into the penultimate round of the championship, Prost had a 21-point advantage over Senna. Sitting in second place and needing a victory to remain a candidate for the championship, with just a few laps to go, the notoriously precise Brazilian born racer made his move. 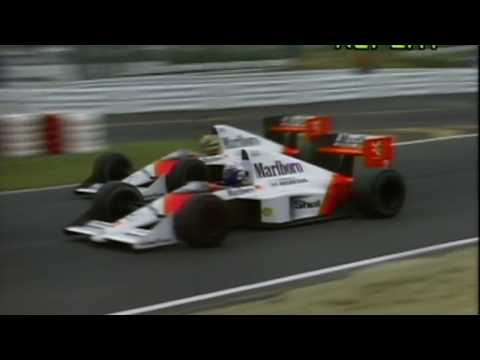 Was the gap there? Yes. Did it stick? No. Prost turned in but Senna was already on top of him and the two cars ended up crashing. In a situation with both drivers out of the race, Prost was the one to win the championship as there was only one more race in the calendar. There was just one problem though, Senna wasn't having it. Refusing to throw in the towel and concede defeat, he waved desperately to the marshals that he was attempting to rejoin the race. And so he did.

Happy ending, right? Well not quite, the stewards had other plans, as they usually do. Though the move on Prost was unorthodox, it was deemed a racing incident. After all, if the gap is there and you are fighting for the championship, you might as well have a go.

They argued that because Senna used the escape road to rejoin the track, he cut the chicane and didn’t complete the exact race distance as the others, hence he was disqualified from the race results. Not a time penalty as it is now, his whole race was gone. This meant that Alessandro Nannini won the 1989 Japanese GP and the championship went to Prost.

For the following season Prost moved to Ferrari and the battle between them was more intense than ever. Coincidence or not, Suzuka was witness to the drama once again, as a clash between the two drivers saw Prost going out of the race and Senna winning the championship. Balance was restored in the universe.

Senna and McLaren romped home with the 1991 Championship yet again with Prost in second. In 1992, Prost, who was sacked by Ferrari for criticizing the car publicly for not being competitive, eventually decided to take a sabbatical year from racing as Senna only managed to finish 4th, in a not so competitive McLaren.

Prost returned the following year to race for Williams with a clause in the contract making sure that Senna could not be hired as his teammate. The Frenchman had his revenge winning his fourth title in the final year of his career as a Formula 1 driver.