1 Seized $75 Million Axioma Superyacht Is Still in Gibraltar, Despite Selling at Auction

In what could possibly be a “get the ball rolling”-type of moment, Ukraine has announced that it will be auctioning off a seized megayacht, with benefits going directly to the people of Ukraine. That vessel is the 2015 Feadship custom build called Royal Romance, estimated at well over $200 million.

Since late February 2022, when Russia invaded neighboring country Ukraine, third-party countries not taking direct sides in the conflict introduced a series of economic sanctions against Russian politicians and oligarchs, in a bid to cut off funding for the war. Relevant to our particular interests were the seizures of luxury assets like car fleets, custom private jets and some of the world’s most famous floating palaces – superyachts and megayachts.

Until the time of press, despite countless assurances in this direction, not a single cent from these seizures has gone to aid the people of Ukraine. The reasons are many and very complicated, but if we were to condense them to a single explanation, it would be that there is no legal framework or precedent for something like this, so most frozen assets are just sitting wherever they were when they were frozen.

Royal Romance could become that precedent. The megayacht was seized in Croatia earlier this year and will be auctioned off soon, with the money going to the people of Ukraine. If this goes according to plan, Royal Romance will become the first seized vessel to be sold off to aid Ukraine. It won’t be the first yacht sold after sanctions, though: that honor goes to Axioma, which was auctioned off under current sanctions so bank J.P. Morgan could recover an unpaid loan.
Royal Romance was arrested in Rijeka, Croatia, at the behest of Ukraine’s Asset Recovery and Management Agency (ARMA). Earlier this week, ARMA announced that it had conducted a mid-November raid onboard the vessel, which resulted in gathering enough documentation regarding ownership. Management of the megayacht was then transferred to ARMA, with plans to sell it auction to “maintain [its] economic value.”

Megayacht News reports that agents from both the FBI and the U.S. DoJ (Department of Justice) were present at the raid. The direct beneficiary of the vessel is not a Russian oligarch, but a Ukrainian national, albeit one with a known pro-Kremlin attitude and very strong ties to President Vladimir Putin. He is billionaire Viktor Medvedchuk, also known as the “dark prince of Ukrainian politics” and a constant feature on sanctions lists in Ukraine for years, and in the U.S. since 2014, where he’s accused of fraud and money laundering.

Medvedchuk was house-arrested and charged with treason earlier this year, was able to escape and was captured again, and was eventually included in a prisoner exchange with Russia. Right before the start of the war, he tried to change management of his floating palace, which he’s had since 2015, presumably in a bid to avoid seizure.

Considering we’re talking about one of the world’s most secretive and impressive megayachts, no wonder. Royal Romance is a fully-custom build delivered by Feadship in 2015, on a naval architecture and exterior design by Feadship De Voogt Naval Architects. The interiors are by Seymour Diamond and the owner himself; after all, when you pay a reported €150 million ($158 million at the current exchange rate) for a boat, you will want to have the final say in its interiors.

Royal Romance is massive in size and extremely luxurious in amenities, though the specifics of its interiors were never disclosed to the public. With a total length of 92.5 meters (303.5 feet), it has six floors and four decks, and “about 50 multi-purpose rooms” in total, according to ARMA. It offers accommodation for 14 guests across seven suites, and additional sleeping for 22 crew.

Amenities include two elevators, a gym and wellness area, a proper cinema, a spa and a beauty salon, and a pool that Feadship described upon delivery as absolutely “fabulous.” It’s 12 meters (39.4 feet) long, 4 meters (13.2 feet) wide, and 1.4 meters (4.6 feet) deep but, despite its size, can be emptied in under three minutes. It comes with an equally fancy waterfall that flows over the stern of the megayacht.

ARMA estimates that the current value of this fully-custom megayacht is of about UAH 8 billion, which is approximately $217.6 million at the current exchange rate. A date for the auction has not been announced. 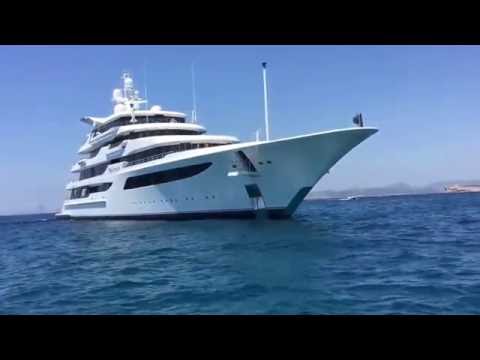