The company best known for its self-balancing two-wheeled vehicles, Segway has recently released a new version, called the SR-3 Patroller. Having one wheel in the front and two in the back, the $12,000 (EUR 8,800) vehicle is more stable and offers more storage space than anterior models.
1 photo
The chances you’ve seen a police officers riding a two-wheeler in the mall are pretty high, so we won’t tell what it is. Now, the same company making the famous vehicles has recently developed an improved model that give even more strength to the Police Force. And we are talking about a lot of officers using them. According to the company’s statistics, there are more than 1,500 police departments and public safety organizations that utilize Segway vehicles.

However, the builders aspected the product to take off on the mainstream market, which never actually happen. Well, not all the manufacturers out there have the same success like the guys creating the Marbel skateboard did. Anyhow, they decided to try developing a more advanced model, the Segway SE-3 Patroller.

Amongst other, the three-wheeler has a lot of safety features such as the anti-rollover technology, the redundant “rider detect” capability, which disables the motors if the rider isn’t present, and an independent front and rear hydraulic braking system. Moreover, it has an integrated power to-go outlet so the driver gets to recharge his gadgets when needed.

The SE-3 is powered by multiple rechargeable Lithium-Ion batteries that can be plugged in at any standard electrical outlet or swapped out for replacement batteries to allow for continuous use. It also features independent direct rear wheel drive, travels in reverse and turns in a very tight radius. The new model also comes equipped with sirens and emergency lights.

Well, we have to admit these Segway vehicles are pretty cool to ride with. Although we just can’t get our mind off those Lambos and Ferraris the Dubai police force is using on their streets. 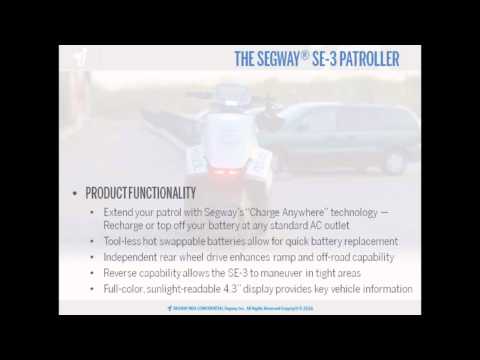