1 The Fastest Electric Scooter in Segway's Lineup Is Now Available to Order, Can Hit 43 MPH

4 Still Pink, But Twice as Powerful, the New Coco 1 Delivery Robot Makes Its Debut in LA

Segway Is Selling an Engine Speaker, So You Can Pretend You’re in a Ferrari

For all their present and future benefits, electric vehicles pose a new danger to pedestrians and other traffic participants: they’re very silent when they move at a crawl. Segway, the biggest maker of electric two-wheelers, has an idea that will change that.
7 photos

Earlier this month, Segway introduced a new model, the GT2, which also happens to be one of the fastest on the market, with a top speed of 40 mph (70 kph) and the ability to go from 0 to 30 mph (48 kph) in just 3.9 seconds. Needless to say, should something or someone come in front of an electric kickscooter traveling at that speed, the result would be terrible.

This would help in terms of alerting others, including pedestrians and drivers, of the presence of the e-scooter long before it comes along: a speaker that plays real engine sounds. It’s called the Ninebot Engine Speaker, and it’s described as an engine sound simulation system that straps on the scooter and connects wirelessly to the motor and brakes. This way, the sound that plays on the speaker syncs with what the rider does in terms of scooter operation.

Four options for engine sounds are available, including a single-, two-cylinder, a V8 and a V12. They’re showcased in the video below, including how the sound picks up when hitting the throttle and idles at a decreasing speed. The Engine Speaker’s main function seems to be to enhance safety on the road, and alert pedestrians and drivers, but it can also work as a “regular” speaker and play your favorite tunes on blast. It might not be the most elegant or considerate way to ride around town, but to each their own, as the saying goes.

The Ninebot Engine Speaker can be charged via a standard USB-C port, and comes with IP55 dust- and waterproof certification. It is compatible with a variety of Ninebot two-wheelers and costs $150 – which is either cheap or too expensive, depending on whether you consider riding an e-scooter that makes Ferrari engine sounds awesome or too silly to even think about it. 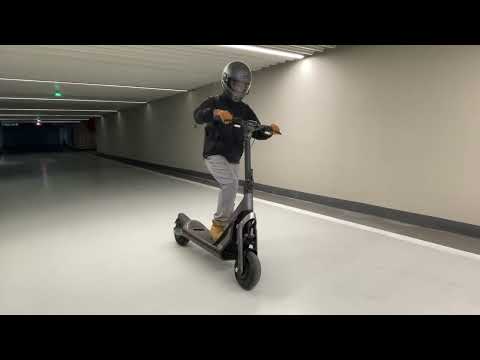