2 Unloading a $3.4M Bugatti Chiron Pur Sport Is a Tough Job, but Someone’s Gotta Do It

4 Bugattis Old and New Flock to Croatia for Exotic Car Meet, Divo Gets the Spotlight

Bugatti officially pulled the plug on the Divo a few months ago, and with only 40 such magnificent machines built in total, seeing one in the open is probably the automotive equivalent of finding a needle in a haystack.
14 photos

A true unicorn on four wheels that used to cost €5 million ($5.6+ million) net when it was presented at the Pebble Beach Concours d’Elegance in 2018, the Divo stunned bystanders at an event hosted by Bugatti in Croatia’s capital, Zagreb.

The car gathering, which brought together several customer-owned Bugattis, as well as a Chiron Pur Sport that had former racing driver Andy Wallace behind the wheel, was eclipsed by this grey and blue Divo. The hypercar drew a massive crowd, and almost everyone had their phones out, immortalizing the moment, likely to the delight of the driver.

Throughout the almost 6-minute long video embedded at the bottom of the page, you can see the Divo being unloaded from a truck, doing a bit of driving in the open, and inevitably joining the exotic car pack. Speaking of which, this included models made by Ferrari, Lamborghini, Pagani, Koenigsegg, and McLaren, built in different eras. And if these normally get your heart racing, then you should definitely scroll down and watch the vid.

Don’t do so just yet, because we have to remind you that the Bugatti Divo, which builds on the Chiron and features a bespoke body, enhanced aero, and modified chassis, is capable of sprinting from 0 to 62 mph (0-100 kph) in a neck-snapping 2.4 seconds. Weighing 77 pounds (35 kg) less than the Chiron, it has a 236 mph (380 kph) electronically capped top speed. Power is provided by the same quad-turbocharged 8.0-liter W16 engine that feeds 1,479 hp (1,500 ps / 1,103 kW) to the all-wheel drive system via a seven-speed dual-clutch automatic transmission. 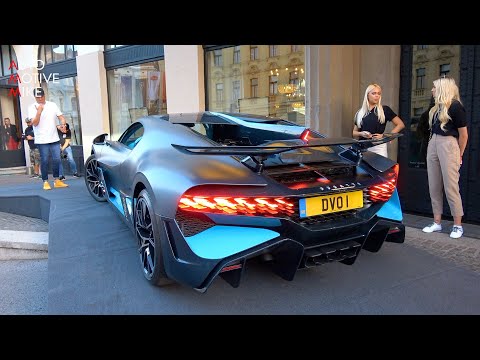