Quite a few days have passed since Tesla took the wraps off the world's first battery-powered semi truck - aptly called Semi - and the Internet still hasn't cooled off from that shock.
1 photo
With rumors talking about a 300-mile range at best ahead of the launch, it's easy to understand why the official numbers have caused such a stir. At 500 miles, the Semi offers two-thirds more range than expected, making it ideal for medium-haul shipping and opening up a much larger section of the market than 300-miles would have.

But it's actually more about the whole package when it comes to the Semi. The truck has an unbelievable aerodynamic coefficient of 0.36 Cd, 0.02 better than Bugatti Chiron's, and it can get to 60 mph (97 km/h) from a standstill in just five seconds. When fully loaded to maximum weight allowed on U.S. highways - that would be 80,000 lbs or 36.3 tons - that changes to 20 seconds, which is still a few times better than the time it would take a diesel-powered truck to do it.

In fact, we're starting to think that diesel trucks are going to pose a big problem for Tesla's Semi once they start sharing the road, as their huge discrepancies in dynamic performance are going to clash at some point. Expect to see Teslas overtaking diesel trucks on inclines as their drivers grow impatient with the latter's trudging pace.

But what is it that allows the Tesla Semi to put all this power on the road, apart from the four Model 3 motors on each of the rear wheels and the immense battery pack that we expect to be in the region of 1 MWh? Well, Elon Musk wasn't very loose about the technical details, but one YouTuber present at the event managed to squeeze between the trailer and the truck itself and filmed the uncovered entrails of the Tesla Semi.

We can't make too much of what's going on there, and it does show the Semi is still a prototype. The final product should have things a bit more tidied up in there, not to mention a protective cover that really should have been in place for the prototype as well. There are plenty of high-voltage orange cables as well as Tesla-branded components - like the drive axle or the "gearbox" - but also parts from other suppliers as well.

The feeling you get is that the whole rig was built to cope with heavy payloads over long periods of time, which confirms Musk's promise of a 1,000,000-mile breakdown warranty. The clip gives us a glimpse at the rear design of the tractor head, particularly its lights, but it's a very close angle, so it's not enough to get a clear image. 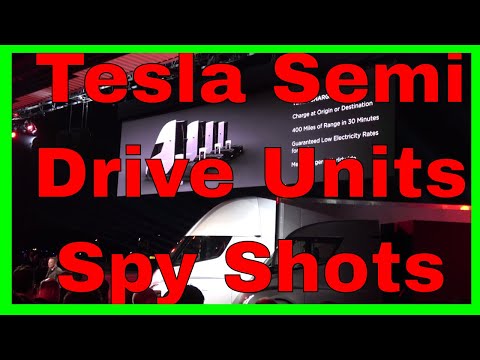