4 Toyota Cuts the Roof Off a Supra, Splits Tacoma in Two - All in the Name of SEMA

5 The “Reindeer Eight” Shows Bentley Mulliner Preparing for a Special "Ho-Ho-Ho"
Car video reviews:
Up Next

If someone is looking for some proper 1940s American car flavor, Hudson’s largest and most luxurious model – the Commodore – easily fits the bill. Remember, Steve McQueen (a.k.a. the “King of Cool”) owned a Convertible. This custom built 1949 Coupe also looks the part, and certainly it's not just because of its Magnuson-supercharged LS3 from under the hood.
46 photos

While it may be purely unintentional, the project even shares much of the same awesome looks as McQueen’s ride. There’s no information about having the same source of inspiration, though, as the build story from Eckert’s Rod & Custom only mentions the one-off was developed as a Grand Touring with ‘49 heritage on the outside and lots of modern amenities on the inside.

Apparently, when the project was finished, the only things left in stock configuration were the roof and the glass setup – and we can easily understand how they came up to that conclusion. That’s because the project has also been documented on video (embedded below) by the Hand Built Cars channel on YouTube, probably chiefly for our Year-End amazement playlist.

Although we have seen many behind the scenes features like this before, it’s still mesmerizing to see a unique project compressed in just a little over ten minutes. It’s like our wishes for the next year materialized in a car; we start from a decidedly forgettable rust-bucket setup (a.k.a. this troubled 2020) and end up with a supercharged LS3-swapped 1949 classic that has modern tricks all over.

By the way, just in case you kept your cool, here are some of the most interesting details of the finished project. The chassis of the ‘49 Commodore was created using lots of C6 Corvette components – transaxle, torque tube, engine, cradles, spindle, and hub bearings. The suspension is a coilover setup, with the Corvette again donating some of the components.

Unfortunately, the 2008 LS3 engine that was fitted with a Magnuson supercharger doesn’t have any power credentials attached to it, although we do know there’s a serious setup based on the included stopping power – Baer six-piston with drilled and slotted 14-inch rotors.

Interestingly, the custom design now includes a tailgate and removable trunk lid, while the white-wall rear tires are accessible through the newly added fender skirts. Thus, no wonder the interior is nothing but custom work, save for the steering wheel that comes from a ‘52 Hudson. 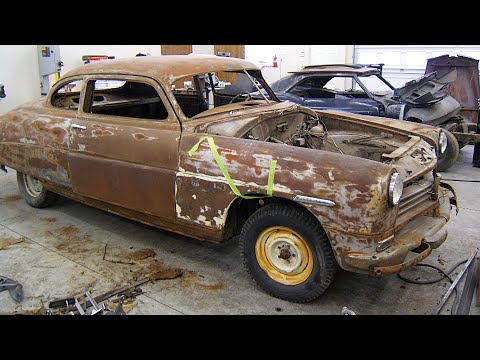