While everybody seems to agree on the place of autonomous technology in the automotive world, the way we get there isn't met with the same unanimous consensus.
8 photos

Well, to be fair, 99 percent of the companies involved in the development of self-driving cars appear to have settled on a suite of sensors, with just Tesla Inc. thinking it can do things just as well with less. The apple of discord is the LIDAR (LIght Detection And Ranging), which the Palo Alto carmaker believes is redundant, too expensive and difficult to integrate into a car's design, while the rest think it is paramount for a complete view of the road.

Some have even claimed that Level 5 autonomy - a car that can drive itself in any condition without any human intervention (so it might as well be missing the steering wheel and pedals) - can't be achieved with fewer than five LIDARs installed, which certainly has to be overkill.

What we know so far is that the very few autonomous cars that are currently testing on the road without any humans onboard use the sensor, and they seem to be doing OK for now. Of course, they still need to gather a lot more miles under their belt before any conclusion could be made, but it's a definite step forward.

Velodyne is one of the best-known names in the industry when it comes to LIDARs, and the company has just announced a new product that, it claims, has twice the range of its previous top model and three times the resolution. These improvements would make the LIDAR useful at higher speeds as well thanks to a much faster refresh rate and the extended range.

To showcase what the LIDAR sees, Velodyne has released a short video of a drive through a city, and we have to say the images are absolutely psychedelic. It's like you're driving with a big source of light on your car as all objects around cast huge black shadows over the colorful contours of the road, cars, people, and buildings. It's not just impressive technology, it's also extremely beautiful. 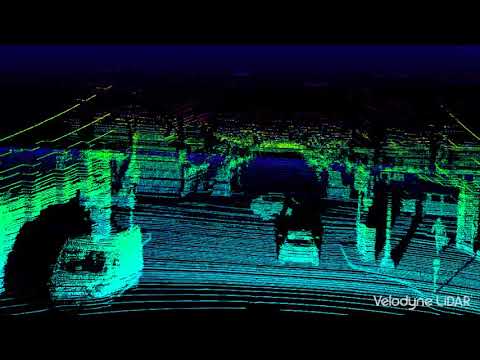