5 Toyota GR Sports Car Lineup Goes Official In Japan, Rest Of The World To Follow
Up Next

C8 Corvette "Figther Jet" Shows American Theme and Then Some

Aurel Niculescu
While it was only presented during the first days of the year, the GR Yaris suddenly seems like a million miles away – a model bred for one purpose alone: deliver the next homologation model for the Toyota World Rally Championship car. But with competitions halted, we can only bring back the GR Yaris into focus while becoming a little tech nerdy.
12 photos

Just like Toyota, as the manufacturer decided to highlight how the new mini hot hatch is being produced on a new assembly line at the company’s Motomachi plant in Japan. It’s dedicated to manufacturing GR sports cars and apparently was sorely needed to reach the performance criterions of the new GR Yaris.

And who knows, with its newly introduced ability to handle “multi-type, small-volume production”, it might be Toyota’s tricky way of acknowledging that more GR models are on the way to complement the GR Supra and GR Yaris.

We’re holding our hopes up because the WRC-style pocket rocket is a small (pun intended) game changer for Toyota. At least in terms of uncompromising productivity, since they relinquished the traditional conveyor system and instead turned to a more “organic" body and assembly line that incorporates a number of different cells interconnected via automatic guided vehicles, says the company in the accompanying video description.

Given that Toyota’s new GR Yaris is – to date – a limited edition sole endeavor, we’re starting to think the rumors of more GR models are holding an increasingly large barrel of truth. After all, it would be a shame to retool an entire assembly line just for a limited-edition model.

Not to mention the cost in terms of human efforts from a team of highly specialized workforce that “allow for high-precision assembly of highly rigid vehicle bodies to levels that are hard to achieve on standard production lines.” Take that, regular Yaris! 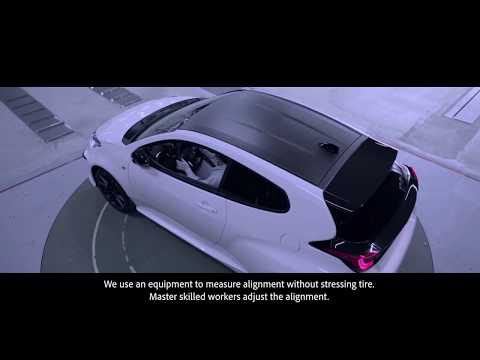