4 Mad Max Interceptor Replica for Sale in the UK

BMW M5 vs Vauxhall VXR8 Drift Off. Which Is Better?

See a Lamborghini Gallardo Lose to a Ford Falcon GT

Home > News > U-turn
Alex Oagana
It's not everyday that you see a modern supercar lose a drag race – even from a roll – against an old-school muscle car, especially one from the land down under.
1 photo
In other words, you should probably consider yourself lucky for being a part of this Internet videos phenomenon, which lets people broadcast stuff like this from the other side of the world.

In short, the following short video was filmed by the passengers of an unspecified Lamborghini Gallardo model that tried to have a go at an Australian Ford Falcon GT, which looks to be of the XY variety.

Completely unexpected, the (probably) highly-tuned Aussie Ford pull quite a bit better that the (probably) stock Lamborghini, making for a rather short but somewhat shameful race for the Italian supercar.

Naturally, there is no way of knowing how much purebreds are housed under the hood of the muscle car – probably a huge stud of horses – but having a short look at the period tires and stock-looking body would make no one believe it can stack up against a Gallardo, never mind beating one from a roll.

The Ford Falcon GT XY (if that is the model, our Aussie readers should correct us) was manufactured for only two years and was available in quite a number of body variants, but the sedan is probably the most “Q-car” of them all, with the orange model in the following video being a perfect example. 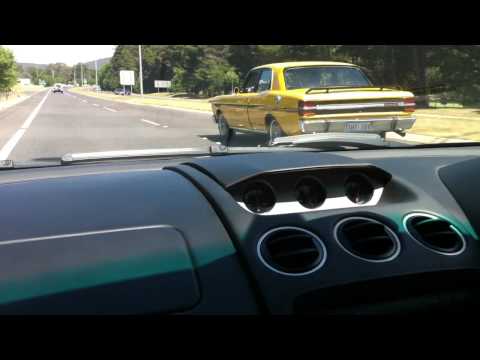