Yes, This Is a Pink VW Golf GTI!

See a G 63 AMG 6x6 Next to a Lamborghini Speedbump

Considered to be the largest, heaviest, most expensive and definitely the most “in your face” passenger car that wears the three-pointed star in recent years, the Mercedes-Benz G 63 AMG 6x6 is a six-wheeled exaggeration.
1 photo
In case you haven't noticed already, a fact which is arguably impossible, every single detail concerning the six-wheeler is exaggerated.

The G 63 AMG 6x6 is currently the only production passenger car in the world with an on-board tire inflation and deflation system, six driven wheels and five electronically-locking differentials.

If that is not enough to color you impressed, keep in mind that it also has portal axles, a total weight of 3850 kilograms (8487 pounds) and an interior that keeps all its four occupants engulfed in comfort via four designo leather and Alcantara-strapped seats which are both heated and ventilated.

Not only that, but the G 63 AMG 6x6 is also the most powerful and probably fastest six-wheeled vehicle on the planet right now, as that completely non-aerodynamic hunk of Austrian metal is powered by a twin-turbocharged 5.5-liter V8 that develops 544 hp and 760 Nm (560 lb ft) of torque.

It can house a Volkswagen Golf inside its wheelbase and it can tackle any pothole, sand dune, narrow river bed and maybe even small hills with its six-wheel drive and one meter forging depth.

The 230 cm (90.5 inches) total height of the car is enough to tower over any passenger car out there, a fact which is made extremely evident by the following video, where a G 63 AMG 6x6 was caught parked near a Lamborghini Murcielago LP 670 Super Veloce.

The low height, overall shape and orange color of the Lambo almost makes it look like an oversized “sleeping policeman” - also known as a speed bump – near the mighty six-wheeler. 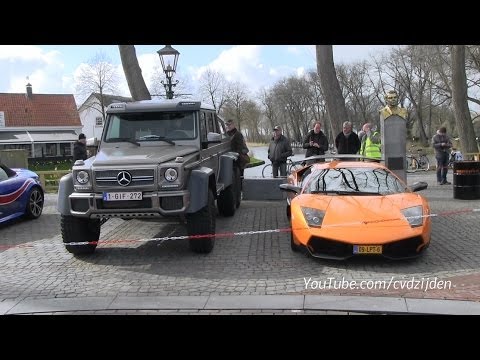