London's Park Lane is home to some of the most expensive and high class luxury outlets on the planet, so it's no wonder that since a couple of days ago it has also become home to a Brabus flagship store.
1 photo
Made in cooperation with Bob Forstner, which is arguably the most exclusive showroom for exotic cars in London, the new Brabus flagship store is now one of the 106 global locations where the Mercedes-Benz tuning expert from Bottrop is present.

“Brabus has been highly successful on the British market for more than three decades. With our new BRABUS Flagship Store in London we want to be even closer to our demanding customers on the island, and we are delighted to have found the perfect partner in Bob Forstner and his team for our branch in the British capital.” said Bodo Buschman, co-founder and current CEO of the Brabus Group.

In order to celebrate and bring even more attention to the opening of the showroom, a humongous Brabus 700 6x6 did a couple of laps of central London, starting car alarms, scaring little children and grown ups in equal measure and obviously struggling not to hit every single car it encountered in the British capital traffic.

A British car spotter going by the YouTube moniker of richnwilliams took the opportunity to pedal his way into following the six-wheeled leviathan almost everywhere it went, resulting in the creation of a video that shows us just how out of place this automotive excess really is in a crowded city.

Based on the already-excessive Mercedes-Benz G 63 AMG 6x6, the Brabus B 63S 700 6x6 is the longest, highest, heaviest and most definitely the most unstoppable automotive creation to ever wear the black “B” logo and the three-pointed star.

With a total weight of around four tons, six-wheel drive, a 46 cm ground clearance, 700 hp and 960 Nm (708 lb ft) of torque, the black beast can be pretty much considered straight-jacket crazy, while seeing it throne over every other car it encounters in London traffic is downright terrifying at time. 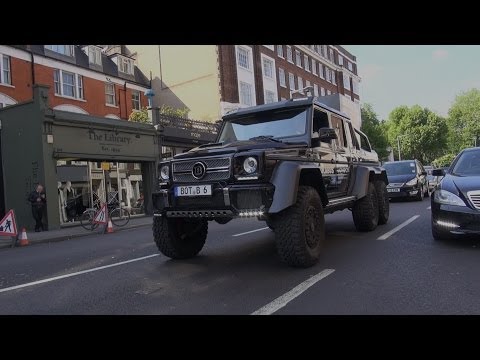