Ciprian Florea
Though no longer built as an official Police Interceptor since 2011, the Ford Crown Victorias are still in service across America, while new vehicles are being shipped nationwide.
1 photo
However, the Crown Victoria is not necessarily the oldest horse serving its citizens... If you’re in Seattle, there's a chance you might stumble upon a 1970 Plymouth Satellite police cruiser. But don’t expect that to happen in a museum, because the vehicle is officer Jim Ritter’s daily patrol driver!

Yep, Ritter has been busy restoring police cars for 14 years now and at about the same time he started the Seattle Metropolitan Police Museum. He got the Satellite from a retired worker and restored it to its original 1970 state, when the four-door Mopar was proudly protecting citizens as a King Country Police Department car.

The owner says there are no modern updates on the vehicle, which still rides like a 1970s built car, but that doesn’t seem to bother him too much when at work. Sure, this old and heavy mule might not scare a villain driving a Porsche 911, but we're so impressed with what Ritter has done to save a classic like this that we just had to write about it. How many people would give up on a comfortable modern car to stroll around in a 1970s Plymouth?

Editor’s note: I suddenly feel the urge to watch Vanishing Point once again! 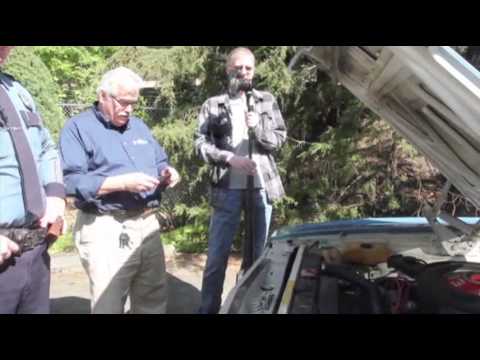