4 SEAT Leon Cupra Gets 290 PS in German Configurator, Updated 2.0 TSI Is Not Yet Official

Seat Cupra Loses 1 Race Out of 3 Against Javelin Throw

Home > News > U-turn
Daniel Patrascu
We've seen cars take on footballers, airplanes and even fidget spinners. This, however, must be a first: car racing against a javelin.
4 photos

The car in question is a Seat Leon Cupra. The javelin is, well, just a javelin. The car has a driver whose name is not important. The javelin has a handler whose name is prominent: Barbora Spotakova, Olympic javelin champion. The Cupra can accelerate from naught to 100 km/h (62 mph) in under 5 seconds and can keep going for hundreds of kilometers. The javelin starts at 7 meters per second and travels at 90 km/h for about 70 meters. So, who's gonna win this drag race? And by what margin?

According to Seat, the competition was held on the “best-of-three” system, and the results are a bit surprising.

The first run went to the Cupra, which outpaced the champion's throw. The second time around, the Cupra lost the start, hence the race. The third attempt belonged, again, to the Cupra, who crowned itself the ultimate champion in this unlikely competition. You can see how the two competitors performing in this event in the video attached below.

This type of publicity stunts (because that's what this was) are always surprising and fun to watch. The particular exercise was meant to promote both the next Olympic games and the Spanish hot hatch, as Barbora Spotakova is brand ambassador for the automaker.

She explains her ability to defeat the 300 hp 2.0 TSI engine by her use of concentration, mental power, hard work, commitment and patience.

“In order to concentrate on what my body is going to do, my mind has to be completely blank. I focus on a spot on the other side of the stadium and virtually project my throw over there,” the Champion, who holds the women's world record at 72.28 since the 2008 Beijing Olympic Games, said. 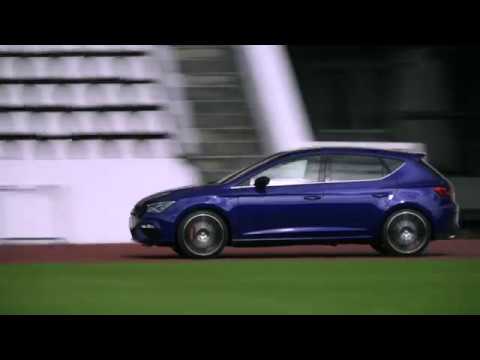