2 BRP Is Hiring Chief of Adventure, Don't Quit Your Jobs All at Once

5 Sea-Doo Debuts Spark, the Budget-Friendly Skijet
Up Next

Cristian Curmei
Since summer is still in full swing, it’s time to hit up those watersports. One company that’s been leading the way for this industry is Sea-Doo. This time around, you won’t be getting to know a jet ski, but rather, a pontoon!?
17 photos

Yes, Sea-Doo builds a whole lot more than just jet skis. Ever since 1968, this Canadian manufacturer has been leading the way with all sorts of vehicles aimed at water fun. Today, their watercraft are known the world over as being some of the most fun and easy to use around.

One of the freshest additions to their family is the all-new 2022 Switch. Now, the Switch isn’t a jet ski but a pontoon, and with that comes an array of features all aimed at helping you redefine your lifestyle and summer sports.

Because the Switch is based on a pontoon design, the one thing it’s sure to offer is space. Three different options are available, and all are meant to serve pre-defined group sizes. How large of groups? Well, the least expensive option allows for up to five passengers on board and comes in with a length of 13 feet (3,96 meters). This is the Compact option, which might I add, start off at $18,000 (€15,370 at current exchange rates).

The remaining two options include the Switch 16, coming in with a 16-foot (4.87-meter) length and room for a group of seven, or the final choice being the Switch 19, a 19-foot (5.8-meter) monster with room for up to nine passengers. The Switch 19 does, however, come in with a much higher price than the initial Compact, but at $29,000 (€24,765 at current exchange rates), it still sounds like a pretty good idea to spend your savings on. Here’s an idea, why don’t you and four other friends pitch in $6,000 this summer and pick up one of these for the group.

Each Switch is constructed using a tri-hull design, offering stability on waters, but also control. Part of the driving experience is offered by the helm of the craft which, unlike any other pontoons I've seen, feature a steering system taken right off of one of their jet skis. Sea-Doo's iBR brake and reverse system is also in place here, so don’t even bother too much with docking as it looks to handle just like a jet ski. There's even cruise control, so you can set it and forget it.

Now, just one question remains, what the heck to do with all that space? Well, Sea-Doo decided that having a very modular floor is something owners will enjoy, so they went ahead and installed under-deck storage and space even for an anchor. You can bring along just about anything you want, from life vests to fishing gear, and even diving gear, depending on how far off the coast you are riding.

As for the power behind the Switch, Rotax strikes with 1630 ACE engine that’s capable of crunching out 170 hp on the 19-foot Switch. With a 29-gallon (110-liter) fuel capacity for the largest of the options, it’s still not clear how much range you’ll get out of it. Then again, range depends on an array of factors and is quite difficult to judge.

At the helm, drivers will have a 4.5-inch (11.4-centimeter) display on which all info is shown. From a speedometer to a clock, fuel consumption and autonomy, and even driving mode selection, all are visible on this digital display.

As far as the exterior design and styling go it’s clear that Sea-Doo is taking a bold step and breaking away from classic pontoon design, you know, the ones with those round barrel-like floats. Even the exterior guard is all futuristic and techy. If you do want to go above and being with your Switch, just let Sea-Doo know what else you’d like to add. I'm sure they’d be very open to the idea of taking your money.

So here’s the deal, even if you have a small family or group of friends, for a mere $18,000, you and your closest folks can all pitch in and pick up a pontoon boat for your summer travels by just tossing in near $4K each. Or you could just go out and buy an e-bike, but I doubt you’ll have as much fun. 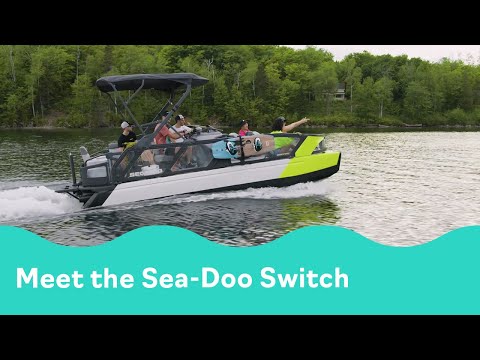