1 Guy Makes Crazy Wheel Concept With 14 Legs Instead of Tires, It Works

Scottish Pro Turns His Driveway Into a Trials Park Made From Pallets, Sure Looks Like Fun

Danny MacAskill has always been a daredevil on two wheels and he’s probably feeling more comfortable on a bike than on his own two feet. The Scottish pro cyclist is renowned globally for his riding skills, both when it comes to street trials and mountain biking. But you don’t just get this good overnight. It takes years of practice, even if you have to turn your own driveway into a trials park.
7 photos

If you want to get a taste of what MacAskill is all about, it is enough to just watch one of his latest stunts, when he rode his bike on top of a wind turbine that was 280 ft (80 m) tall, using its blades as a bike lane, defying the wind and making a statement. It was his way of raising awareness on climate change and the importance of renewable sources of energy.

Now the extremer is back with another video shared as a gift for his fans, so they'll have something fun to watch over the holidays. The tricks in the clip are, in fact, a compilation dating last year, when, just like the rest of the world, he was in lockdown, with too much time on his hands.

With no places to go and nothing to do, MacAskill decided to make the most of his home detention and hone his riding skills. So he turned his driveway into a trials park. He ordered 30 pallets and had them delivered to the house, as pallets have always been the go-to obstacle when practicing for trials biking. Wood planks were also used.

The video shared on his social media is full of raw, unedited tricks, which makes the whole watching experience better, more honest, and appreciated by his viewers. There are some funny fails in there but also a lot of inspiring cool tricks that he absolutely nailed. You can watch Danny MacAskill doing what he does best in the video below. 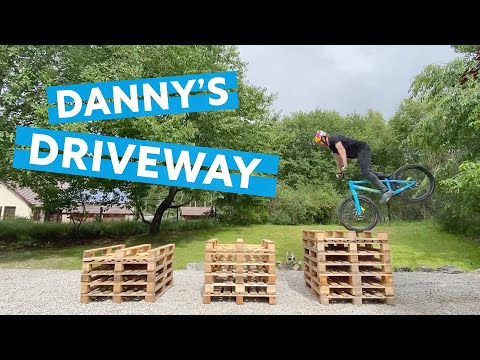