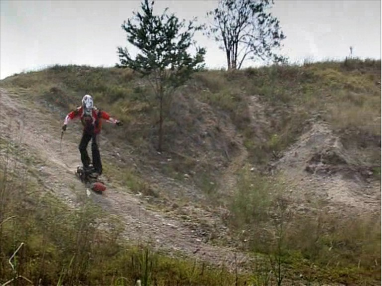 Scarpar, a private held company based in Queensland, Australia, found a way to please both motocross bikes and skateboard fans with its new prototype Powerboard, designed to run on any terrain, except for water.

Scarpar is looking to raise capital in order to support their project development, so that extreme sports enthusiasts can take advantage of the Powerboard. While in 2008 it was awarded a $250,000 Commercial Ready Plus grant from the Australian Government in order to assist with the design for manufacture phase, the global financial crisis caused Scarpar to keep missing the projects’ deadline.

This year, Scarpar won an Australian Anthill Magazine (The Australian Magazine for Fast Growth Companies) SMART 100 award, a list of 100 of the most innovative products.

What makes the Powerboard special is its twin-tracked articulated tank style powered by an electric or 4-stroke petrol onboard engine. This product is able to reach a top speed of 60 km/h using a hand control for acceleration and breaking. The steering is pretty much the same as of standard skateboards.

Though no final engine has been chosen, a battery-electric powerboard might be the first to make it to production, as Scarpar CEO Andrew Fern told Gizmag. The current retail price estimate is between US $2,000 and $3,000. Our guess is that those bold enough to get one will not regret the price though.

Testing the prototype was Darren Powell’s job, the 207 km/h record holder for the last 12 years and the world's fastest snowboarder. You can see how he is handling the 60 km/h on the Powerboard  in the video below.