4 Scania Working with Porsche on New Trucks
Car video reviews:
Up Next

German investigators have discovered that the truck used in the Christmas market attack was equipped with an AEB system.
6 photos

The vehicle used in the onslaught was a Scania R450, equipped with such a system since several years ago, when the European Union made it mandatory for vehicles of this category.

Back in 2012, the EU adopted legislation to compel all truck makers to install these systems as standard on their models that exceed 3,500 kilograms.

As Deutsche Welle notes, investigators have discovered that the vehicle stopped itself after about 250 feet (70-80 meters) thanks to the system. It is important to note that the Advanced Emergency Braking system could have prevented the impact if the driver had not made any input, but its precautionary actions were canceled by the electronics based on the presumption that the driver was in control. This technology works in the same way on cars.

The system is designed to prevent other vehicles being rear-ended by a truck in case the driver falls asleep at the wheel or is not paying attention. When an impact with an obstacle is detected, the system issues an audio and visual warning to alert the driver.

If the human behind the wheel does nothing, and the vehicle is traveling at a speed that exceeds 14 km/h (8,6 mph), the system kicks in and applies the brakes at maximum capacity.

However, a built-in safety feature of the setup allows the driver to avoid the impact in ways that do not involve braking. For example, any intervention on the brakes, throttle, or steering, will cancel any precautionary actions made by the system.

In the case of the Berlin attack, the terrorist behind the wheel was probably accelerating and handling the steering when he hit the Christmas market with a speeding truck.

Another built-in safety feature within the Advanced Emergency Braking system stopped the vehicle from making further victims. Some of you might already know that these systems also include a function that applies the brakes after an impact, which is meant to stop the vehicle from getting involved in multiple collisions. That safety feature was responsible for stopping the 450 HP truck that was used in the attack. 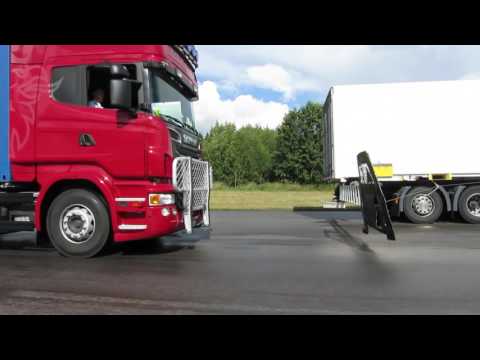