1 Oceania Cruises’ Vista Is an Unapologetic Exercise in Outrageous Luxury

July is autoevolution’s Italian Month, a virtual celebration of excellent designs hailing from Italy, whether in the auto, two-wheel or the naval industry. Born in Rome in 1982, Lazzarini is all things Italian: his work breathes sophistication and timeless elegance, beauty and premium quality, but at the same time, it oozes copious amounts of outrageousness.

Italian naval design is usually subdued, but Lazzarini breaks with tradition in most of his projects, to design a vision of the future that the majority of us can only dream of. Or, as he writes on his official website, his work is directly influenced by the past but looking only to the future.

Lazzarini is one of the most versatile and eccentric designers from Italy, and that’s saying a lot. That said, if you have $300 million to spare on a boat, he’ll hook you up with just the thing.

Earlier this month, Lazzarini Design unveiled its latest concept, for a superyacht called Saturnia. At first sight, Saturnia is tame in comparison to other Lazzarini projects: it still favors a sleek aesthetic, with surprising and remarkable angles, vast expanses of glazing, and floating structures, but it’s tame. This design comes from the same mind that created a megayacht shaped like a swan, the Avanguardia, where the neck and head was a crane structure that lowered a floating pod to sea; or the shark-shaped megayacht called Prodigium, which had expanding terraces and its own private harbor.

What Saturnia does have in common with Prodigium is the private harbor, but it has it relocated mid-ship. Smaller in size, at just 328 feet (100 meters), Saturnia hides a very fancy secret: a floodable garage situated amidships, revealed only when needed. As the sides open away and upwards, they become private terraces slash outdoor lounges with glass bottoms – what an amazing way to spend a sunny afternoon, right?

With the superyacht at anchor, this inner harbor can house at least a couple of moored tenders of 5 feet (1.5 meters) each, offering access on board. When in motion, the tenders are lifted by crane and moved for safekeeping in the actual tender garage. So basically, while it’s very striking visually, this feature is what you could call a “whim.”

Lazzarini imagines Saturnia as a multi-purpose superyacht, so he leaves the interior design and the exact layout up for future owners. The idea is that available space would allow for a variety of configurations, depending on the owner’s needs and budget, with accommodation for as few as 10 and as many as 20 guests, and 20 more crew.

Amenities would be top-notch, regardless of the final interior layout. There’d be wellness areas (or what us commonfolk call a gym and spa combination), at least a couple of pools, vast entertaining areas both indoors and outdoors, and roomy interiors with floor-to-ceiling glass windows. The beach club is, again, tame by comparison to other superyachts, but in keeping with a vessel of this size. Plus, when you have your own inner port, which could also be used for diving, a “regular” beach club with just access to water and a handful of sunbeds should suffice.

Saturnia has five decks, with two of them cantilevered aft; Lazzarini imagines one of the pools suspended over an outdoor dining area, and the visual is nothing short of striking. The deck area is walkable all around, offering guests quick access to all the available amenities. Instead of the helipad on the upper deck, the designer places a landing pad for eVTOLs – the Stratosfera bubble that floats and sails that he designed earlier this year.

Saturnia would come with hybrid propulsion: twin diesel engines and a central electronic water jet system that would allow it to sail with zero emissions. With both the hull and superstructure made of dry carbon fiber, Saturnia would be 50% lighter than any other vessel of its size and, because of it, able to soar at speeds of up to 30 knots.

In short, Saturnia is a dream, the perfect superyacht in every sense of the word. Lazzarini says it could become true, though: for anyone willing to spend $300 million on it, after a 30-month wait time. 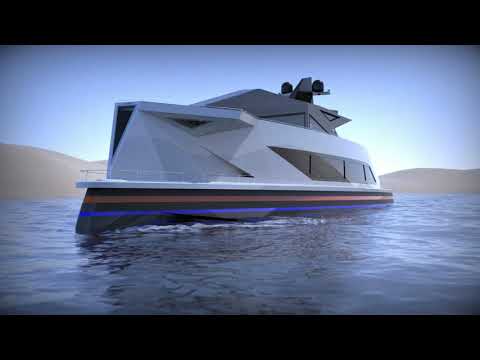