Saturn, End of a Different Kind of Car Company 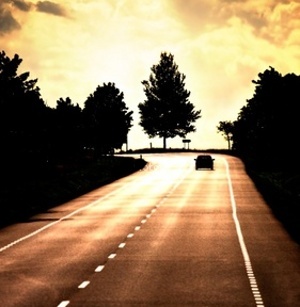 Rarely in the automotive industry has a punch-line characterized the philosophy behind a brand better than the tag line chosen by Saturn's advertising people in its early days. Although aware that the phrase has been used and over used, especially this year, we feel there's no other words out there which can better describe the reasons behind Saturn's creation and its recently sealed fate.

"As a result of PAG’s decision, we will be winding down the Saturn brand." This is how GM decided to end the story, as the deal with Penske Automotive Group (PAG) hit a solid wall on the final stretch. But how did it start? And, more importantly in Saturn's case, why did it start?

There's few of you out there who don't know by now that Saturn is probably younger than many of us. The brand, officially established in 1985, began on paper three years earlier.

The 1980s, troubled as they were, posed interesting challenges for the American automotive industry. The implementation of the Corporate Average Fuel Economy (CAFE) standard, which rushed the advent of the SUVs, opened America's doors to a flood of small, reliable, more fuel efficient vehicles badged "made in Japan". What appeared to be just another phase turned into an all-out assault, with the Japanese quickly going to the hearts and minds of the American consumer.

As one of the key players on the market, American manufacturer GM had no choice but to react. Whereas the creation of a smaller, cheaper car under existing brand names was not deemed viable, the need for a new name on the market slowly took shape. 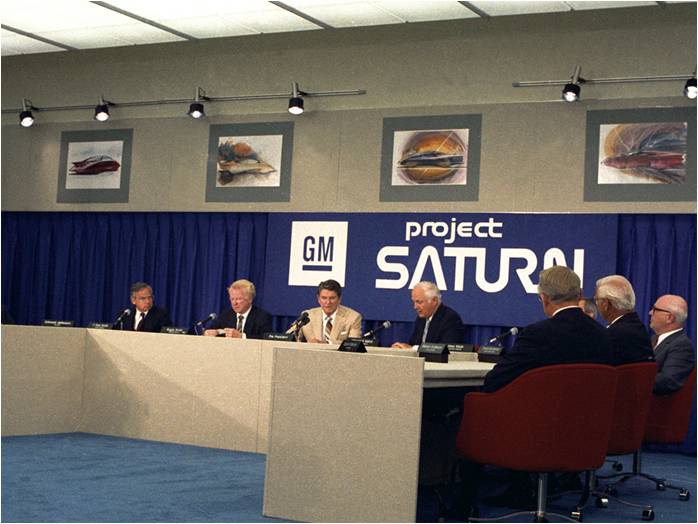 The short story begins in 1982, when Alex C. Mair, vice president of GM's Advanced Engineering Staff, began promoting something he was not used to, given his prior GMC experience: a small, revolutionary car which was code named Saturn, not after the planet, but after the US rockets which led the space race. A name which, GM hoped, once it has beaten the Russians, will most surely have no problem beating the Japanese.

The new brand "in the works" became known to the public one year later, when the manufacturer's chairman, Roger Smith and its president, James McDonald, embraced the idea. By the end of 1983, GM and the UAW announced the creation of a joint Study Center to see off the Saturn project.

In 1984, what will become known as "Group of 99" is formed. The let's call it task force, comprised of 99 UAW members, GM managers and employees, began work on the project, with the first demonstration vehicle being ready by September.

The following years would be dedicated by Saturn to the creation of the brand, from scrap. In 1987, GM announces the Market Area Approach, meant to create the dealership network and release the first Saturn-aimed vehicle, made entirely (except for the roof and hood) of thermoplastic. The end of the year sees the creation of the Saturn brand logo, a restyled interpretation of Saturn, the planet. 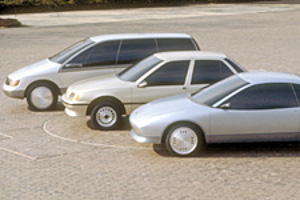 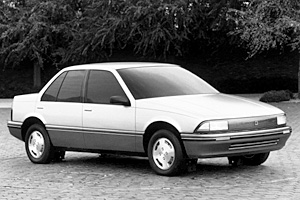 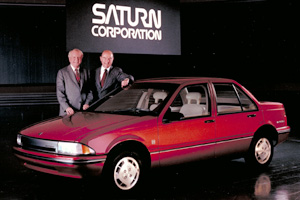 Two years later, the Market Area Approach pays off and the first 26 retailers are appointed.
This doesn't mean, however, cars started rolling off assembly lines.

Everything was set for the American public to get a big, pleasant surprise; after all, the Time magazine called Saturn 'the biggest US automotive gamble in years," as the project burned through no less than $3 billion already.

Unfortunately for GM, their secret project was sent into the open by an insider, who managed to give Automobile Magazine all the photos they would have ever dreamed of: high-quality, color pictures of the Saturn car, as well as a bunch of other sensitive GM materials, showing the 1993 Chevrolet Camaro and Pontiac Firebird.

Unlike what we see in modern days, when carmakers themselves leak photos and information of upcoming models, GM was furious at the time. So much so that they even placed a $30,000 bounty on the head of the one who leaked the photos. To give you an idea of what the leakage meant for GM, this was what Dee Allen, corporate spokesman told Time Magazine at the time.

"People are very upset. It's no different from being on the Detroit Pistons and giving away the playbook." 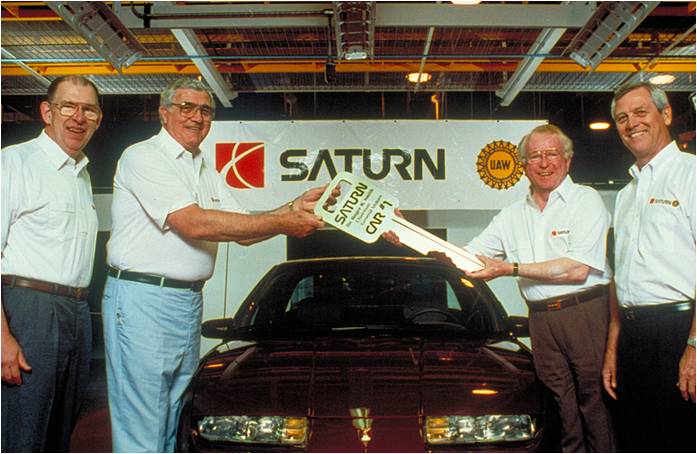 In 1990, after the car already had some notoriety thanks to the leakage, the first Saturn car was rolled off the assembly lines. It was called 1991 Saturn SL Series and was a four door sedan. Unfortunately, the car came into the world in a closed ceremony, attended by those who created it and several GM leading figures.

The new brand was launched and the prospects seemed promising, in light of all the money spent on it. The cars were sold under the No Hassle, No Haggle strategy, but that soon proved not to be the case.

One year into its existence, the SL hit its first problem: "an improperly formulated coolant." Minor, you say? Think again... GM decided not to repair the possible faults caused by the antifreeze, nor to replace the liquid. After spending billions on developing a low priced (the SL had a $12,000 price tag) vehicle, the carmaker decided to replace 1,836 cars!

Even so, GM had the sales numbers to back such a decision. The car became so successful that by 1992, over 100,000 vehicles had been sold. By 1993, the American manufacturer sold over 1,000 cars per retailer, nearly double than rival Honda.

The S Series proved to be big for GM and Saturn. Developing the standalone Z-body platform paid off in the end, allowing the manufacturer to cut corners and use plastic instead of metal for the body panels. It was sold until 2002, with new models being launched in 1996 and 2000. It had three versions, the SC (sports coupe), the SL (sedan) and the SW (sedan wagon).

For nearly a decade, the S Series had been the only thing coming off Saturn's assembly lines. The S had at most two generations for each body-style during that time and several special editions. The S, with its Z-body, would remain the single self-made Saturn car. After the 2002 model year, the last of the S, Saturn began its downward spiral, largely "thanks" to the way GM decided to handle the brand next.

In 2000, GM announced it was ready to pump an additional $1.5 billion in Saturn for the creation of four new products by 2004, including the one which would come to be known, since 2002, as the Vue SUV. It is based on the same Theta platform which, in its extended form, was later used for the Equinox. 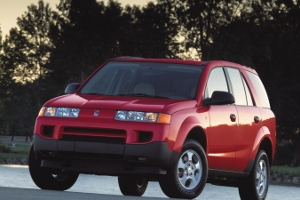 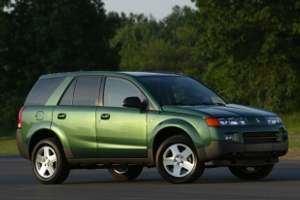 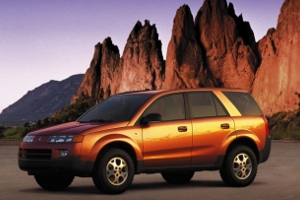 The car that started it all, the S, together with its Z-body, were replaced in 2003 by the so called Delta platform (Saturn lovers were so devastated by the change that they made the S Series the most stolen vehicle in the US that same year).

The first Saturn car to get the new platform was the Ion, a model which came in two versions, a coupe and a sedan, only lasted for four years, before being replaced with the Saturn Astra. Buyers in Europe knew it as Opel/Vauxhall Astra... 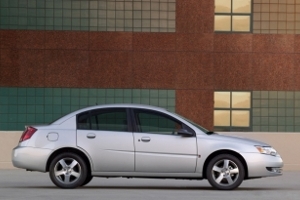 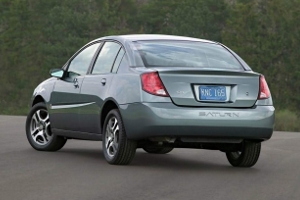 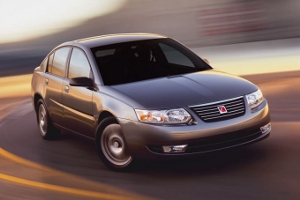 In 2005, Saturn unveils a new concept, the Aura, a car also meant to replace a long-lasting Saturn model, the L Series (born in 2000, dead in 2005). The L was a somewhat strange addition to the automotive world as it only stirred a lot of confusion.

Even if the S Series production had been discontinued, sales of the model were still ongoing in the US. As you read above, the S Series was sold in SC, SL, SW models. The 2000 L Series was marketed under the following names: LS, LW. Meanwhile, Toyota was selling the Lexus LS, Ford the Lincoln LS... Confused? So were the consumers...

As said, the L was discontinued because of the very poor sales figures. When the Aura arrived, it promised to bring a big change for the carmaker. And it did. The car was considered as one of the best looking GM cars in years (except for the cheap interior, some say) and the best Saturn to date. After all, how else would a car receive the North American Car of the Year award (2007)?

The success of the Saturn idea was quickly forgotten by GM, who began mixing models, brands and badges with a determination worthy of a better purpose. Saturn was slowly turned into an American copy of European models, or at least this is how it looked from the outside.

The Sky, the first and only sports car wearing a Saturn badge, used the same Kappa platform as the Pontiac Solstice and Opel GT, with a design based on the Vauxhall VX Lightning Concept...(!) 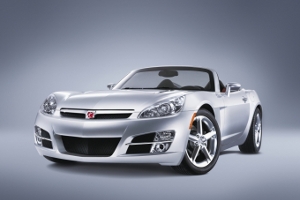 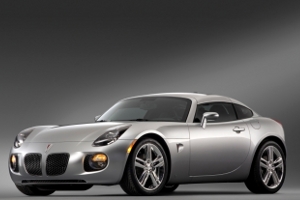 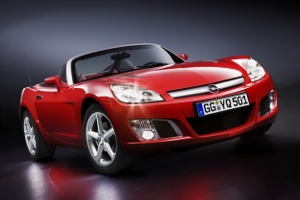 The strange ideas of car design and construction GM had for Saturn continued with the 2005 Relay, another first and only, but this time a minivan. The inbreeding between GM models reached such a level that the Relay was in fact a rebadged Chevrolet. By the time GM thought of a platform for it, the Lambda, the minivan was scrapped due to poor sales (2007).

The Lambda platform, however, moved on, coming to life on the Saturn Outlook. (as well as on the Buick Enclave, Chevrolet Traverse and GMC Acadia). 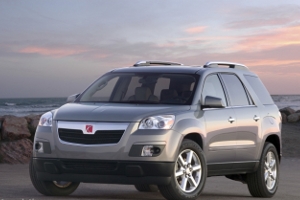 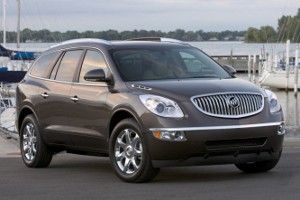 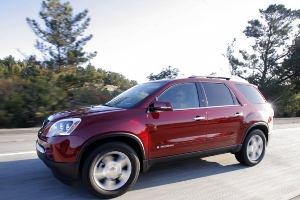 And then the crisis struck...

As you have seen above, Saturn started life out of a need. The need to send the Japanese back to the bottom of the sales charts from where they came. The idea of a small, reliable, somewhat fuel efficient US built car was brilliant. Especially because of the plan to add an affordable price tag on it.

And, for about a decade, it worked. The S Series sold well (even thought not as exceptional as some expected from the "biggest US automotive gamble in years"). Problems for Saturn started not because the S was replaced, but because of the way it was replaced.

It would futile to go into the "hows and whys" that drove GM into the rebadging frenzy and eventually into bankruptcy. Take the Outlook, for instance; the same as the Enclave, Traverse and Acadia - different badge - priced in between the Traverse and the Acadia.

There was no mention during the 8 years of Saturn's creation of the brand becoming a "trim level" for GM. The brand was supposed to create a new market, as a standalone brand. Instead, Saturn became another mean through which GM could build one car and sell it in a thousand ways.

Saturn was the single brand, aside for the Pontiac, created by GM itself. All the others, Buick, Cadillac, Chevrolet, Daewoo, GMC, Holden, Hummer, Oldsmobile, Opel, Saab, Vauxhall, have been purchased over time.