5 Santa Switches His Sleigh for a Rollback Truck for This Particular Delivery
Car video reviews:
Up Next

Excuse us for doing the outdated “Hold on for your deer life!” joke on this occasion, but this advert for the sale of a one-owner 1990 Morgan 4/4 clearly had it coming for itself. After all, the car was dressed up with the proper attire, complete with Christmas decorations, jingle bells CDs (they’re period-correct, after all), presents, and Santa’s reindeer in front of the “SLE IGH” license plate!
20 photos

It turns out the British roadster is up for grabs on Auto Trader and can be had for £24,000 (which is a little over $32k at the current exchange rates) in pristine condition. For starters, the Corsa Red with stone leather interior and walnut dashboard example is in great condition, with a mere 25k miles on the odometer.

One can imagine the sole previous owner hasn’t visited that many chimneys during the car’s lifetime, although it’s said that he actually owns a pet reindeer – so there’s a chance some fur might be found inside.

And before you ask, the press release (embedded below) for the listing clearly states the latter is not coming along with the convertible, so ‘Rudolf’ is almost set to enjoy the retirement perks alongside Mrs. Claus.

We can’t attest to the advertised “197 million square miles in sky travel every Christmas Eve” not affecting the car’s health, though – since we have never quite managed to catch a ride with Santa on the fabled day during childhood and early adulthood (no matter how elaborated our plans were!).

Apparently, there are many special features included with this particular Morgan 4/4: mince pie and sherry stains on the dashboard, a stuck Michael Bublé CD in the audio system, along with the world-renowned naughty and nice list that was accidentally left by Santa in the glove box...

Well, joking aside, this right-hand drive British roadster does come with a few nice amenities, including weather equipment, wind deflectors, a stainless-steel exhaust, or twin Webber carburetors for the 1.6-liter engine that’s hooked up to a manual transmission. 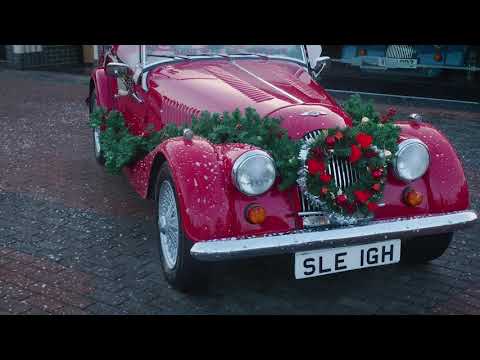