Home > News > Car Profile
Aurel Niculescu
Although he’s been toying around a white 2021 Ford Mustang Mach-E for more than a few days, it’s only in the fifth episode of the Blue Oval series that Sandy Munro finally drives around in the zero-emissions SUV. Well, at least the wait was well worth it, as we see Munro’s opinion about masks, his patriotic feelings, and his thoughts about other traffic participants that don’t have a feisty EV at their disposal.
11 photos

The well-known automotive engineer has started a small series on the 2021 Ford Mustang Mach-E about a week ago and as per tradition we’ve finally reached the interesting part where the teardown expert takes the car out for a spin. That happens in episode five of the miniseries, with all of the preceding installments being of the static variety – but just as instructive as always, so feel free to sift through all of them.

Now, back to the actual driving experience, we can say without a shadow of a doubt that after previously reviewing the 2021 Volkswagen ID.4, our patriotic host (he’s got a nice stars and stripes pattern on the mask he actually doesn’t like!) has very high expectations for the domestic rival: “hoping that it’s going to be a good experience... let me rephrase that, a better experience.”

After engaging in playful conversation with the robot lady giving him directions to the charging station he wants to arrive at, he’s immediately impressed by the strong acceleration feeling exhibited by the Mach-E. He even gives us a comparison card for the values of the Blue Oval against the Tesla Model 3 and Y before merging into traffic on the expressway and highlighting another thing he doesn’t like.

That would be the “monroney” (aka the window sticker) preventing him from seeing the other vehicles - he probably likes to make sure with his own eyes, although we can imagine the Mustang has a driving assistance aid for blind spot monitoring.

While trying to make use of the feisty acceleration to escape being “boxed in” by others or stuck behind a “grandma minivan,” (at the 3:58 mark) Munro also gives us more positive thoughts about his Mach-E joyride. As such, he seems impressed by that fact that it feels as “exciting as the 3 and the Y,” with great ride and handling as well as an overall feeling that makes the EV SUV very close to a regular Mustang.

Interestingly, Munro even mentions “impulse buying,” so he simply announces that his company is going to acquire an example... meaning more Mustang Mach-E episodes are to be expected further down the line, including ones with the vehicle being torn to pieces to see what makes it tick. 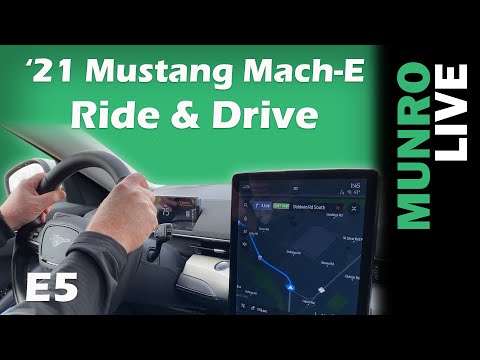