3 German Port City Fell Victim to Angry, Destructive Tornado, It Was All Caught on Camera

4 Ocean Drone Captures Stunning Video Inside a Hurricane, for the First Time Ever

Saildrones Are True Ocean Spies for Hire, They Will Never Stop

Daniel Patrascu
For as long as they’ve been around, drones have embedded themselves into the public conscience as mostly aerial machines. That may be because there are a lot of airborne drones out there, operated by civilians and military alike. But the term drone is a far more encompassing one, and includes other types of machines as well, even if some of them are particularly rare.
12 photos

Seafaring drones, for instance, are part of that category. Despite the many advantages such machines could bring to a very diverse range of human endeavors, there aren’t that many of them out there at the moment.

The most prominent of this select bunch are probably the pieces of hardware developed by a company called Saildrone. They’re the ones responsible for the first-ever crossing of an ocean by an uncrewed vessel back in 2013, and have been in the news quite a bit recently.

Describing itself as the "world leader in oceangoing autonomous surface vehicles," Saildrone made the machine most recently responsible for those incredible images we’ve got from inside Hurricane Sam, back in October last year.

But these beasts can do much more than that, and this is why we thought it’s best to dive in a little deeper into their world.

At the time of writing, Saildrones are already in the water, proving what they can do to whoever is looking. To date, the floating pieces of technology have amassed 15,000 days spent at sea (that’s more than four decades) and covered a total of half a million nautical miles (757,000 miles/926,000 km).

They can be used for all sorts of activities humans can dream of. They can be deployed for “strategic observation, vehicle tracking, and communications,” threat detection, oil detection and spread mitigation, and Intelligence, Surveillance, and Reconnaissance (ISR) missions. And they’re designed in such a way as to look out both above the water and under the surface.

Saildrones use a combination of wind and solar energy that it theory could allow them to operate without interruption 7 days a week and for up to a year, without having to come back for maintenance and refueling.

There are three Saildrone versions currently available, namely the Explorer, Voyager, and Surveyor.

The entry-level, and the smallest, is the Explorer, the same one that shot footage inside a hurricane. It comes in at 23 feet (7 meters) long, and can be used to measure ocean data (salinity, temperature, and so on), levels of atmospheric and dissolved CO2, and fishery-relevant indicators like currents and fish biomass.

The Explorer can reach a top speed of 3 knots, and has virtually unlimited range because it is only powered by wind. It can be equipped with sensors and cameras, both on the parts that float above the water, and on the ones that are submerged.

Up next is the 33-foot (10 meters) Voyager, and this one can throw into the fight acoustic payloads that can be used for seafloor classification, mapping, and remote area exploration.

It comes with two propulsions systems, one that relies on wind, and a 4 kW electric motor acting as auxiliary. It can reach a slightly higher top speed, 4 knots, but its endurance time almost half that of the Explorer, at 180 days.

Last, but not least, we get the Surveyor, a mammoth, 72 feet (22 meters) long drone that is powered by wind, like all the others, but also (unique to this one) by a 75 hp diesel engine. It can cruise at 6 knots, can be deployed for up to 180 days at the time, and can be used, among others, for data collection at depths of up to 7,000 meters.

We are not being how much it costs to operate one of these things, but whatever that cost may be, transport of the drones to the location, their launch and retrieval, and the delivery of the data gathered are all being done by the company that makes the Saildrones. 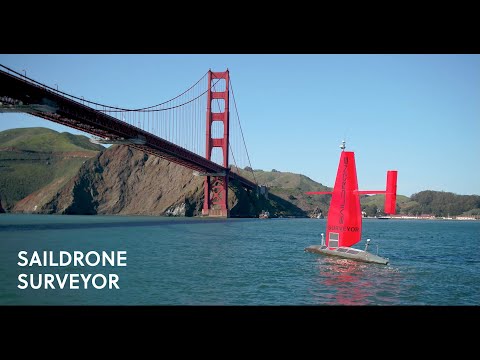