4 Mercedes-Benz Is Working on a Fleet of Green Steel Cars, Aims to Become CO2 Neutral

The Mercedes-Benz S-Class has been the brand's best luxury product for as long as we can remember, and the limousine has led a pretty solitary life up there at the top.
218 photos

Sure, the GLS-Class claims to be the "S-Class of SUVs" but let's face it: it's not. It's just a slightly longer GLE-Class with a squarer body shape. There is only one S-Class and, for a very long time now, it's been the car to beat for every other brand trying to get a slice of the luxury segment pie.

Now, though, if the competition failed to offer a proper rival, it's actually Mercedes-Benz itself that's proposing a new one: the all-electric EQS. The model is the fourth member of the rapidly growing EQ family after the EQC, EQV, and EQA, with the EQB, EQE, and EQS SUV set to follow shortly after.

So far, though, the EQS feels like the only truly competitive electric model from Mercedes-Benz, offering the kind of range we've come to expect from a modern EV. Well, there is still a difference between the official rating and the actual performance on the road, but the 108 kWh battery pack should be enough to satisfy the needs of most people.

Besides, there's much more to the EQS than just its range. As the name suggests, it's supposed to be the S-Class of electric vehicles, and since this is a much simpler claim to test than that of the GLS-Class thanks to the two cars belonging more or less to the same segment, that's precisely what carwow's Matt Watson set out to do.

People looking to buy the ultimate Mercedes-Benz limousine now basically have two options, so the question of which is better needs a definitive answer. You won't get that, but you will at least watch a comparative review and hear the opinion of someone who has driven both of them back-to-back in almost any condition imaginable, which should be good enough.

The S-Class is renowned for the way it insulates everyone inside from the outside, muffling every sound almost completely and absorbing every bump or vibration. Well, it's easy to imagine how the EQS takes that to the next level thanks to its quiet, vibration-free powertrain, and how surreal that experience must feel. It's like a concert house, minus the concert.

Dynamically, the EQS does a good job of hiding its weight, but not a perfect one. The 5,500+ lbs (2.5 tons) don't hinder its ability to glide over bumps but take it on a more technical road, and its limitations will begin to creep in. Funnily enough, the S-Class feels like the sportier car - it feels "dynamically superior", as Matt puts it.

That being said, it's the EQS that makes for a better highway cruiser. Not only is it very quiet, as we've already established, but its weight helps it settle down well, and the smooth, instant acceleration feels superior to the way the S-Class still needs to drop down a gear or two and rev the engine to gain speed efficiently.

Interior design is another area where the EQS blips in front. This used to be one of the S-Class' strongholds, but its electric sibling seemingly found a way to do things better. Well, more modern, at least, since anything related to design is ultimately profoundly subjective.

Anything apart from the exterior design of these two. We can all probably agree the body styling of the EQS was not the company's design department's finest hour (especially if you look at the Audi grandsphere. Admittedly, that EQS looked good as a concept too, so let's not get overly excited just yet). However, and this is where the subjectivity kicks back in, it's starting to grow on us, and since pretty much everything else about it is so great, we're starting to be a lot more forgiving about its quirky looks.

And so is Matt, apparently. Track battle and drag race results pending (though the latter can easily be predicted based on the separate quarter mile runs the vehicles made in this clip), his surprising pick out of these two is the electric newcomer. Admitting something is better than an S-Class is never easy, which actually makes the decision even scarier since it means the margins weren't that fine at all. 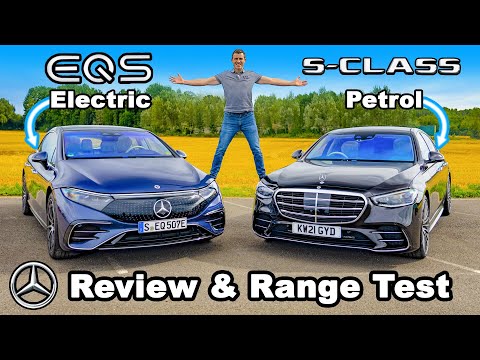