Now that winter is (almost) here, it’s time for everyone to make a quick assessment of their tire situation and figure out how they want to handle the cold temperatures that are rapidly approaching. That’s if you live in a climate that abides to the usual rules, of course.
1 photo
Most new cars come fitted with all-season tires that are basically a compromise between totally losing grip during the winter and being barely ok during summer days. The truth of the matter is, you’re better off using summer and winter tires and alternating them in between seasons.

However, some people still consider that the performance of their all-season treads is decent enough for the cold season. What they don’t know is exactly how big of a difference there is between them and a proper winter tyre.

In order to emphasize that difference, the guys from Bridgestone put together a small comparison in Denver, using two identical cars, on different treads.

While one was using its stock, all-season rubber, the other one was fitted with Blizzak snow tires that are specialized in handling ‘special’ situations. The cars used were two BMW 328i models that, as you already know, have a rear-wheel drive setup that’s the trickiest to handle during winter.

What impressed us the most was how big the difference between the two was in that little rink they had at their disposal. Admittedly, that was only ice and during the cold season you’ll also have to deal with snow, but since both cars were tested in the same environment, we think a point was well made. 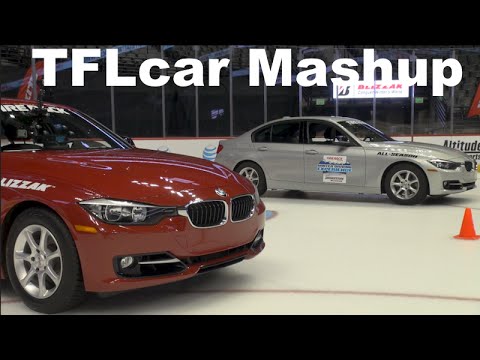