3 Just Another Day in Russia: Helicopter Lands on Highway

5 Batman: The Dark Knight Rises Trailer 3 Shows Batwing
Up Next

Mihnea Radu
War is death; war is the evil. However, this Russia vs. America thing is fun if you just see these killing machines as vehicles, not tools of destruction. And just look at what skillful displays the "Soviets" can put on with their Mi-28N Havocs.
1 photo
Many people have argued that the Mi-28 Havoc is a superior tank hunter to the AH-64 Apache. It carries just as many rockets, has a bigger machine gun and its top speed is superior as well. Their design is remarkably similar as well, since both machines have the pilot and weapons operator sitting one behind the other and lots of rockets placed on wings.

You may not know this, but the Havoc has seen quite a lot of action and is currently fighting ISIS insurgents in Iraq.

We've been told that this helicopter display was seen for the very first time at 'Aviadarts 2015', a show put together near the Russian city of Voronezh. Russia's might is being displayed in front of officials from India, Pakistan, Egypt, China and a few African nations.

You might think that this is a total waste of money, that Vladimir Putin is flexing his muscles while starving his people. But while America doesn't have a helicopter display team, it has plunged trillions (yes, that's thousands of billions) into the F-35 program. It was supposed to be an an aircraft with VTOL capabilities to be used by all armed forces, but reports suggest its payload is smaller than a P-51 Mustang and the bombs specifically designed for it can't be carried.

Did you guys notice the helicopter shooting fireworks while spinning? That's a Kamov KA-50/52 Shark, believed by many to be the best tank hunter in the world. Instead of a tail rotor, it has twin blades that spin in opposite directions and are moved using concentric shafts.

This means less power is needed to stabilize the helicopter and more is available for maneuvers and forward thrust. 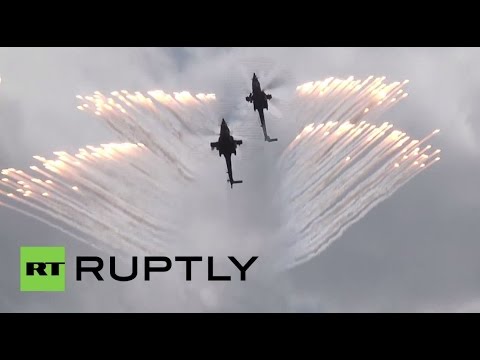