Russian Mechanic Shows Us How He Fixed a VW Jetta Wreck

While most of Russia is busy crashing cars, one person is busy putting them back together. Good Guy Arthur is a mechanic specializing in accident damage repair, and his videos are surprisingly entertaining.
4 photos

This week, we're dealing with a Volkswagen Jetta. Once again, you can tell that this is a North American model since it's got those orange elements in the headlights that European models don't get. But that doesn't matter, as all Jettas are made in Puebla, Mexico.

This trusty German compact sedan has suffered a front-end shut, slightly offset from the center, as most accidents are. Used, a car like this would be worth anywhere from $5,000 to $10,000, depending on the mileage. But as a wreck, it's a bargain. What's more, it's probably got more power than the Euro-spec versions.

Which is why some crazy Russian probably shipped it over and had Arthur the mechanic bring it back to life. Surprisingly, he does this with just a few replacements parts. The rest is just TLC.

After stripping the Jetta's front end, the mechanic discovers the right part of the chassis has been bent. He hammers it back into shape, measuring the other side for reference. What's interesting is how basic the tools he uses are - hit a piece of wood with a hammer, hit a brick with a hammer, hit a hammer with a bigger hammer.

For us, the most satisfying part is when he fixes the door with a couple of specialist tools. There's a special welter used to pull out the metal and heat-shrinker. It would have been easier just to order a new door, but probably more expensive.

After about a week, the Jetta returns from paint, looking as shiny as the day it was new. Like most Volkswagens, putting it back together is an easy job. Even the radiator is a quick job! 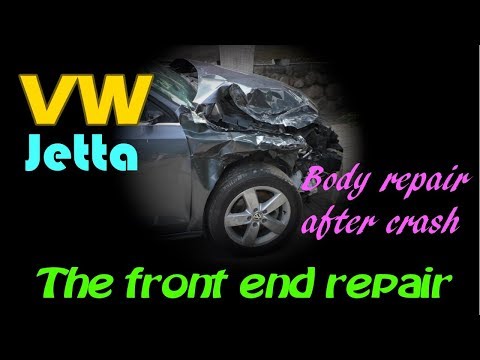