1 Can the Russian Mechanic Fix a Lamborghini Gallardo Wreck?

4 Mechanic Hammers and Welds Audi RS7 Wreck Back into Shape

5 Watch a BMW X5 With Serious Rear Damage Get Repaired
Car video reviews:
Up Next

Russian Mechanic Proves Fixing a Tesla Wreck Is Not Impossible

Fixing a Tesla wreck is right up there with sneezing with your eyes open on the list of things that are impossible to do. Well, it's not mechanically difficult, just financially unwise.
5 photos

So you wreck your old Model S, write it off, get some money from the insurance company and buy a new one. But did you ever think about what happens to that car? There's a lot of value locked in the old bucket of bolts, which the entrepreneurial Russians are only too happy to dig out.

The man with the shovel is Arthur Tussik, a YouTuber known for his... courageous wreck repairs. And yes, we do know that he's technically not Russian.

Anyway, the wreck of the day is an old Model S, the P70 model, if we're not mistaken. It must have hit something pretty hard frontally, possibly at highway speeds. The side of the car is also pretty messed up.

Like in most other situations, the repairs need to start with removing all the damaged parts. The funny thing is that the Tesla ends up looking like it got its engine taken out, even though there wasn't an engine there to begin with.

The challenges immediately appear because the front chassis rails are all messed up and they are made out of aluminum, which is more difficult to work with. Thankfully, it's not that bad, and Arthur makes quick work of it, at least in YouTube time. The actual repair lasted something like 30 days, 20 of which went to the bodywork and the rest into the paintjob.

Perhaps the most interesting part is that Russians somehow find relatively affordable spare parts. The mangled doors, hood, fenders, and bumper are all replaced with new or salvaged ones. The funny thing is that the panel gaps end up being much better than on any early Model S. 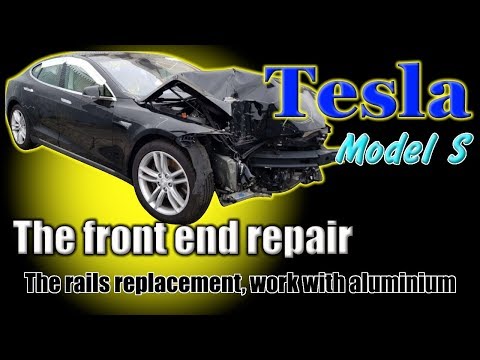