5 No More Batteries! Guy Hacks His Cheap Earbuds So They Can Charge Themselves From the Sun
Coverstory

Russian Guy Built a Solar-Powered Car From Scratch, Plans to Drive It to China

Otilia Drăgan
The most unusual concepts at the recent IAA Mobility 2021 showed that the automotive industry is clearly on a transformative path, where sustainability takes center stage. A young man from Russia created on his own a quirky vehicle that’s representative for these trends – it’s solar-powered, made from recycled components, and it’s even connected.
11 photos

A 23-year old guy became famous on the Internet after showing the world his creation – a solar-powered car which he ironically called “Temnaya Faza” (Dark Phase). It seems that it all started with Nikita Poddubnov longing to have an electric car, like some of the colleagues at his former job, so that he wouldn’t have to pay for fuel. Unlike most of us, he was able to actually build one himself.

If you think that Nikita’s car looks like a piece of junk, that’s because it is. No expensive parts here, just a homemade aluminum car frame, wheels from Chinese scooters, an electric motor and solar panels. Temnaya Faza took 200,000 rubles (less than $3,000) to make, and it shows. But what matters is that this thing works.

The 150 kg (330 lbs) car has 200 W panels on its four sides, plus an additional 400 W panel. Nikita says that, with the solar panels fully charged, he can drive his car for six hours, at 30 kph (18.6 mph). Granted, it takes nine hours to charge them, and you can watch Nikita doing all sorts things while he waits for the panels to be charged, in his videos. Of course, it’s only during sunny days when this DIY car can move in full solar power mode. For the rest of the time, it requires batteries.

But Nikita has great plans for his creation. First, he didn’t just want to drive it around the neighborhood, but actually travel to Central Asia and China, with it. He even made an app for his phone, so that he could remotely control some of the car’s features, like the headlights.

Temnaya Faza’s creator is documenting all the work that he’s doing on the car, and the fun adventures on the way, in his videos. He admits that “there’s still work that needs to be done”, but, at the very least, his project is an inspiration. And a lot of fun. 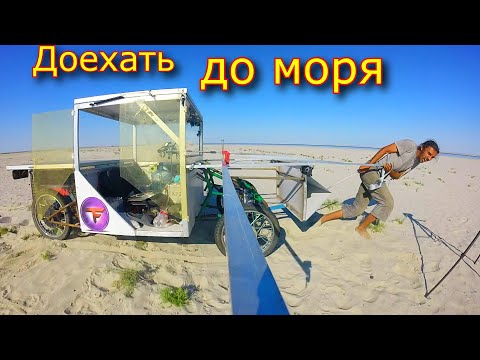