1 Can You Change Engine Oil Without Turning Off a Motor? We Now Have an Answer to This

5 All Parallel Parking Problems Disappear If You Add a Fifth Wheel to Your Car
Car video reviews:
Editorial

Yes, we know that Coca-Cola and Mentos is not exactly a fashionable subject anymore, as videos showing all sorts of stunts by combining the two substances have been circulating online for many years now.
10 photos

It is likely at this point that every web surfer has seen at least one such clip, in which someone mixed Coca-Cola (or Pepsi while we’re at it) and Mentos to create a very gassy reaction. So far, we are unaware if anything positive can come out of this, besides a few laughs, but the guys at Garage54 might be on to something.

The Russian YouTube channel, which has created some one-of-a-kind content for the popular platform involving all sorts of vehicles (OK, that would be Ladas), is behind this new ‘experiment’ that may or may not work. If it actually works, then motorists might soon throw a few Coke bottles in the trunk, next to some Mentos, and forget they’re there, until they get a flat.

Why is that, you ask? Well, the chemical reaction is actually gas, which might be used to inflate a tire. But can you actually do that? That’s what we are about to find out, with the team behind the channel going the extra mile to prove whether such a stunt is actually feasible. Gallons of Coke and dozens of Mentos packs were sacrificed for the sake of ‘science,’ or ‘views’ better said, and everything was filmed for the internet to see.

As for the actual car used in this video, well, it was obviously an old Lada, wrapped in custom livery to hide the rust, and promote their YouTube channel. So, can you actually inflate a tire by mixing Coca-Cola and Mentos? You are about to find out, as the answer lies only mouse-click away, and you know the drill, don’t you? 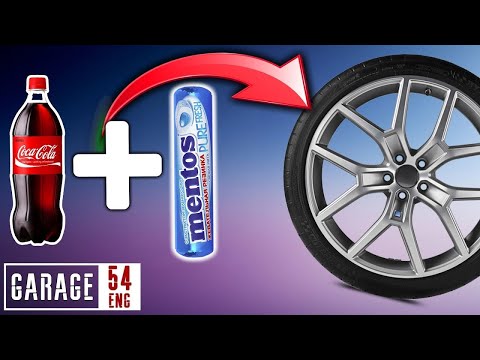